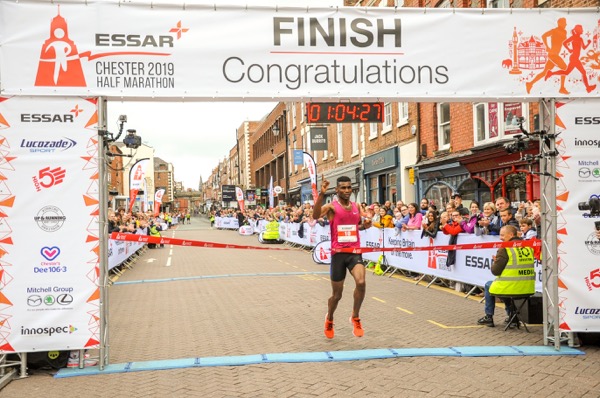 Chester half goes to form

A welcome dip in the temperature first thing on Sunday morning gave over 5,000 main race runners and 1,000 family fun runners near perfect running conditions for yesterday's (Sunday 19 May) Essar Chester 2019 Half Marathon. The front end of the action saw podium regulars Kirsty Longley and Mohammed Abu-Rezeq add to their medal collection, with the latter unbeaten over half marathon distance this year.

Chester Half is one of the UK’s longest established and most highly regarded half marathons, starting and finishing in the historic Roman/Medieval city of Chester. The fast and largely flat city and rural race route is run entirely on closed roads.

As anticipated, there was a three-way battle in the women’s competition with pre-race favourites Julie Briscoe, Gemma Connolly and Kirsty Longley leading the charge. It was Liverpool Pembroke & Sefton AC’s Longley who made the decisive move, though, taking first in 1:19:03 followed by Briscoe (1:19:47) Connolly of St Helens Sutton AC (1:19:55).

While Ben Fish had been identified as a potential challenger to Abu-Rezeq, the Altrincham & District runner looked untouchable as he took first in 1:04:28, his fastest ever half marathon time. Blackburn Harriers & AC’s Fish took second (1:09:27) and Simon Birch of Hinkley RC third (1:10:38).

Race organiser Chris Hulse said: “We’ve done our very best to make this a special race from start to finish. We are absolutely delighted with the number of athletes, volunteers and supporters who have all played their part in making it such a memorable event. Having our wonderful city central to it all is also a massive factor in what makes our race a unique experience.

“It’s clear from feedback already received that huge thanks are due from the runners to the communities and householders along the course, especially those of Mollington, Saughall and the Garden Quarter. The support they gave both in terms of encouragement and refreshments really spurred the runners on when they needed it the most!”

One of the central aims of the Essar Chester Half Marathon is to support local communities and charities. The expectation is that race runners will raise in excess of £500,000 for charitable causes, with Northern Lights being the main race charity for the 2019 event.