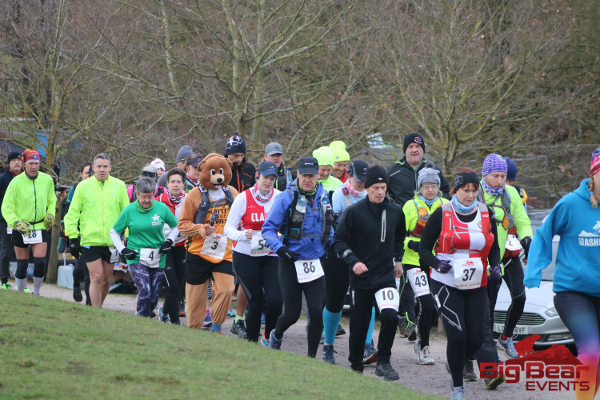 Known as ‘Mental Bear’, Matthew has embarked on a year-long fundraising campaign on behalf of Scotty’s Little Soldiers; a military charity that supports children who’ve lost a parent or parents whilst serving in the British Armed Forces. The Big Bear Challenge was one of many events on his list.

A keen obstacle course racer, he has completed numerous events in Europe as part of his plan and just recently, ran 365 miles in January in his bear costume. Last month’s snow, ice and sub-zero temperatures didn’t stop him and neither did Thursday’s strong winds or a 12 hour night shift.

The Big Bear Challenge was held at Ryton Pools Country Park, Coventry starting at 9am. A 6 hour event where runners chose how many 3.3 mile laps to complete within the time limit, helped on their way by the generously stocked feed station. They ran 4 laps for a half marathon, 8 laps for a marathon or 9 and above for an ultra on a relatively flat course apart from a few hills.

Finishers received a medal for their hard work especially on a windy day and refuelled with tasty flapjacks from Rugby Real Bread.