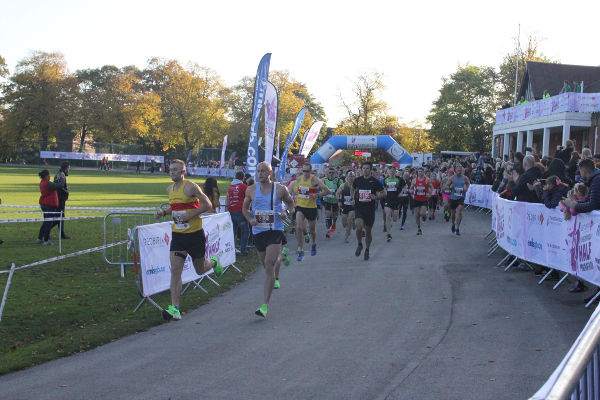 New course records were amongst several reasons to celebrate at Sunday’s (20 October) Chesterfield Half Marathon. There were successes in the 5 Mile and Fun Run too.

The Redbrik Chesterfield Half Marathon attracted its biggest volume of entries to date including one from Narciso Azevedo who travelled from Rio de Janeiro to take part. He was one of many who enjoyed the race and the effusive support from volunteers and residents alike, making it a day to remember.

As well as a half marathon, there was the Peak FM 5 Mile Run, the 1K Blachford Fun Run and Pronto Paints Wellbeing Challenge – the latter open to people from schools, workplaces and organisations who completed it as teams.

The Half Marathon and 5 Mile runners started together at 9.30am in front of the cricket pavilion at Queen’s Park. They stayed together for the first mile before splitting off to follow their designated routes that took them around this market town in Derbyshire. These two races were followed by the Fun Run at 9.40am that was held within Queen’s Park.

Richard Start of North Derbyshire RC finished in style, winning the Half Marathon in 1:11:52 and posting a new course record. Susan Lewis of Roundhay Runners was the first female in 1:24:27, which was also a course best.

There was a similar scenario in the 5 Mile with Louise Cocking winning the women’s race in a record 33:09. The race was won by Rob Shoreson in 29:59.