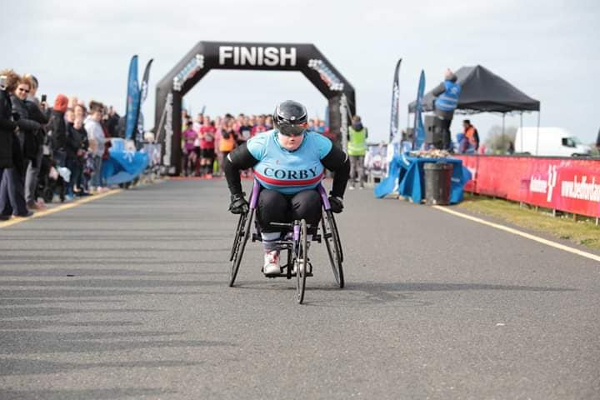 Despite suffering life-changing injuries following an accident, Carole James showed that This Girl Can participate in sport, giving her a new lease of life. The ‘Top Gun’ fan has found her passion as a wheelchair racer and as an advocate for disability sport.

Carole James was involved in a car accident in 2007 that resulted in a condition called ‘Complex Regional Pain Syndrome’. A chronic condition in which the nervous system goes into overdrive, causing severe pain and extreme temperature changes such as a burning sensation in her legs. She also has weakness in the left hand side of her body – problems that together left her needing to use a wheelchair.

This meant Carole was no longer able to play an active part in the Air Cadets and in 2009 had to give up her involvement, which led to her becoming isolated and depressed.

Things changed in 2012 when after watching the Paralympics, she realised that sport could be an option. It was a case of finding the right activity for someone who had been very competitive up until the accident.

She tried several activities including archery but none of these felt quite right until she was invited by Northamptonshire Sport to the launch of a new wheelchair racing club.

Carole was hooked after the first lap, relishing the feeling of being in control along with the adrenaline rush and returned the following week and every week since. She entered her first race – the Sport Relief 3 Mile which she enjoyed and a year later, completed a 10K.

Then parkrun entered her life. Carole contacted Northampton parkrun where she was made welcome with everyone cheering her on and has been a regular for the last two years. Like ‘Maverick’ in ‘Top Gun’ she feels the need for speed and is known for her vocal reminders of her presence on Saturday mornings.

Since then she has become a volunteer and created her own ‘Tail Roller’ role from a discussion within the parkrun Just for Wheelchairs Facebook group. She is a high profile figure in Sport England’s This Girl Can campaign and committed to raising awareness of disability sport.

Carole’s future sporting goals are a half marathon then a marathon. We wish her good luck!

Finally...Carole was interviewed by Michelle Lewis as part of her series of podcasts on Anchor FM called 'Running Tales'.