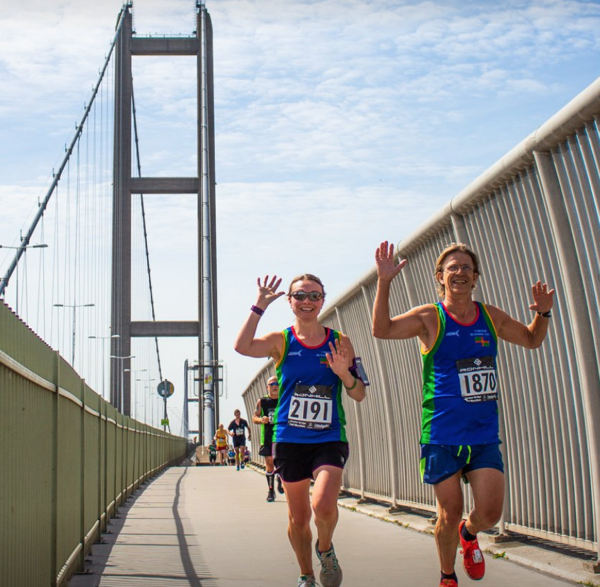 Bumper Turnout For Humber Half

Last Sunday (24 June), close to 1800 runners were give the opportunity of completing a half marathon with the magnificent Humber Bridge in the background. The Humber Bridge Half Marathon, regarded as one of the most impressive events on the north of England race calendar, saw victories for Roundhay Runners’ Callum Elson (1:14:22) and the University of Sheffield’s Rebecca Rigby (1:20:16).

Originally established by the Rotary Club of Hull, the first race was staged in 1999 and has grown to become the biggest Rotary fundraising event in Hull and the East Riding, raising funds for charities and organisations on both sides of the river.

In warm conditions on Sunday, the large field were given their marching orders by Bob Thomson, a local 84-year-old runner. Bob, a prominent figure in the local running scene, has competed in events across the world, including Greece, France, America, the Arctic Circle and across the Equator.

Elson, 7th placed at last month’s Asda Foundation Leeds Half Marathon, stepped up another gear to take first position in an impressive victory. East Hull Harriers’ Robert Weekes (1:15:04) was second and Robert Payne of Caistor RC third (1:15:49). Rigby put in an equally strong performance in the female competition in a time that also secured her 10th overall. Keri Pearson (1:27:21) and Natlie Bell (1:29:14) were her closest competitors.

One runner commented: “What a fantastic event! Brilliantly organised from the race village to the water stations (and sponges) to the dramatic finish, awesome medal and great T-shirt. This has to be a half to put on everyone’s agenda for 2019! Loads of marshalls, all supporting, friendly and encouraging and the supporters were fantastic. Thank you!”