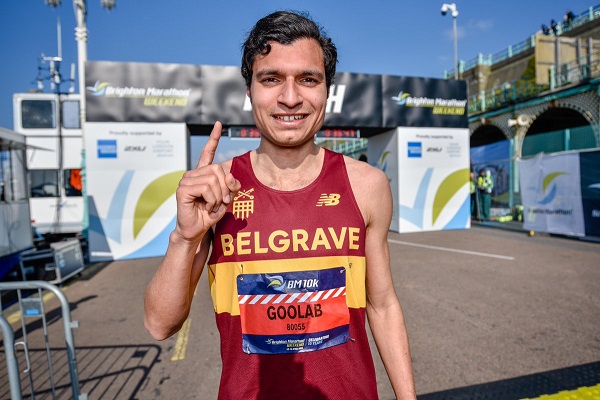 The award of England Championship status raised the stakes for the 2019 BM10K event and the response from the athletes entered was to set two course records and revise the UK 2019 rankings as PB times littered the roads between Preston Park and the finish on Madeira Drive.

In fact new English 10K champion Goolab, whose previous best was 30:46 in 2015, led the runner-up Adam Hickey (Southend, 28:53 PB) to second on the national list (ahead of Callum Hawkins' 28:55) and Andrew Heyes (Hallamshire Harriers, 28:56 PB) was a mere tick away in third place. Pre-race favourite, Chris Thompson (Aldershot, Farnham & District) was forced to withdraw from the contest at 6km, suffering from a heavy cold.

The women's race was almost as impactive as Steph Twell's first ever sub-32 minute 10K run places her third in UK behind fellow Olympians Laura Weightman (31:39) and Eilish McColgan (31:51). Twell was joined on the rostrum by Mhairi Maclennan (Morpeth Harriers, 32:59 PB) and the new English champion, Emily Hosker Thornhill (Aldershot, 33:03).

Nearly 200 runners finished within 40 minutes on a course that has been tweaked to iron out any tight turns and the race was run in bright sunshine with a headwind in the closing stages.

There were at least 20,000 runners involved in Brighton Marathon Weekend with an estimated 125,000 spectators on the course and visiting the bespoke Event Village on the beach. An estimated £6million was raised for charity throughout the weekend's events.