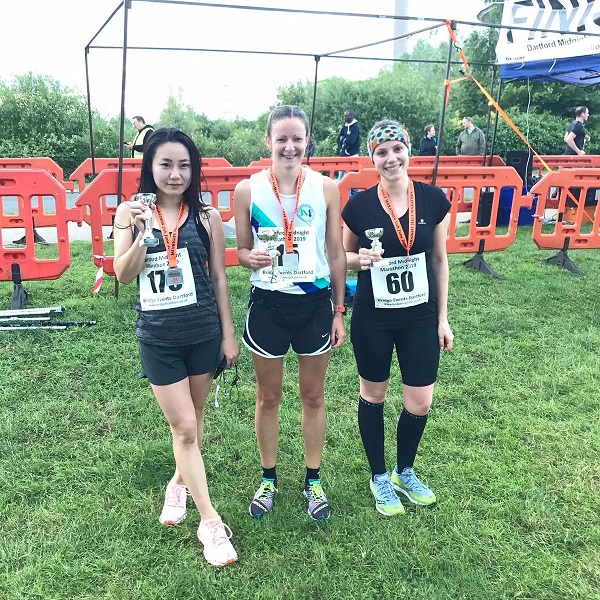 With all three races in the Bridge Events Midnight Marathon starting simultaneously at 7pm on Saturday (15 June) the first finisher was always going to be the winner of the half marathon and although not up there with that famous Vicar of Dibley moment, it was indeed a woman!

'Geraldine Granger' may not have been noted for her prowess at athletics but Annaka Charters (Victoria Park & Tower Hamlets) will be if she continues on her current trajectory. The former member of Mornington Chasers has progressed from 1:40:36 to 1:25:01 in less than five years.

Annaka was accompanied by the first three men for the opening 10 minutes of this four lap race but was soon building a gap no-one could bridge – appropriately enough in the shadow of the Queen Elizabeth II Bridge at Dartford. The winning margin was three and a half minutes over Sam Buddery (Runhead AC, 1:28:37), Simon Johnson (Dartford & Whiteoak Tri, 1:28:45) and Tim McMahon (Saffron Striders, 1:29:10).

The women's podium was completed by Junko Niwa (1:45:24) and Fiona Mueller-Lundin (1:49:16) while the winner was back on the course to support her father Graeme Charters, before telling runABC South: "It was great to run a two minute PB and take the overall win.

"It was a small field but well organised and a fast course, with lots of support due to the lapped nature of the race. The added element of an evening race and supporting my dad in his first half marathon on Father’s Day weekend added to the overall experience."