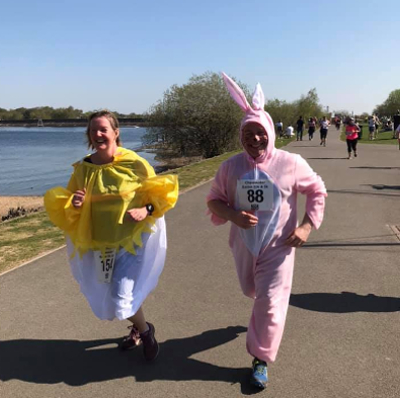 Kept on the boil at Chasewater Easter Egg

Over 600 runners braved the heat at the Chasewater Easter Egg 10K & 5K yesterday (Sunday 21 April). There were egg-cellent runs on the hottest Easter Sunday on record.

The scenic Chasewater Reservoir in Burntwood, Staffordshire was the location for this Easter-themed event organised by Nice Work. Rising temperatures resulted in 80 to 100 runners dropping down from 10K to 5K and made it hard going for those wearing a costume. However, the Easter rabbit and chicken were smiling despite the conditions.

A children’s race started at 10.15am followed by the 10K and 5K at 10.30am from outside the Innovation Centre. They ran a short loop around the centre before continuing in a clockwise direction around the reservoir, completing two laps (10K) or one lap (5K) on a multi-terrain course.

It was another winning performance by Kelly Butler who became the first female in 41:12 followed by Tracie Trueman of Lawley RC in 42:51. Claire Thompson of Vale Royal AC was third in 44:35.

In the 5K, Andrew McQue of City of Stoke AC was the winner in 17:13. In what was a successful morning for Wolverhampton & Bilston AC - Tyler Hawley was second in 18:22 followed by teammate Dylan Illidge in 19:55. Scarlett Williams was the fastest female in 19:57 and fourth overall.

The themed medal and Easter egg were vote winners although the main concern was ensuring the latter didn’t melt in the sun.