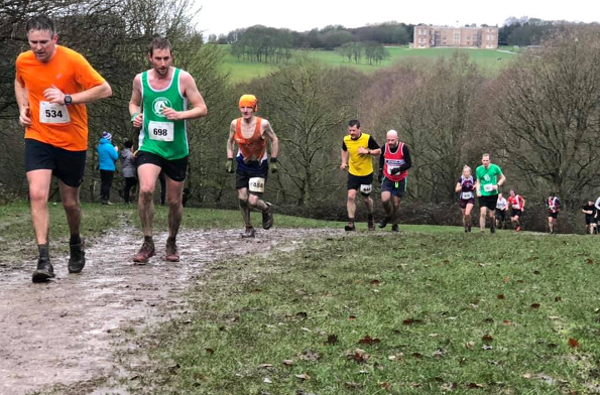 Runners have a blast at Temple Newsam Ten

Hills and mud were an explosive combination at the Temple Newsam Ten (12 January) and the deep puddles only added to the Sunday ‘fun’. However most participants managed to stay on their very wet feet at this arduous race.

All 1,000 places sold out in a day for the 5th Temple Newsam Ten (TNT) from St Teresa’s AC – a testament to the organisation as well as the location. The Temple Newsam Estate in Leeds was the venue for a mixture of road and off-road running over a distance of 10 miles and in what has become all-too familiar weather as of late.

Mud, water and more mud were on the menu as participants converged on the Tudor-Jacobean House, waiting in the rain for the race to begin. Then at 9.30am they headed away from the house and along a challenging route consisting of trails, grass, tarmac and hills that put their early season training to the test.

Conditions were slippery underfoot requiring shoes with a good grip, and possibly waders for the puddles, as they continued through woodland and on country paths before finishing in the grounds of Temple Newsam House.

Daniel Grant of Valley Striders AC stayed upright and raced to victory in 1:00:56. Sam Robins of Chapel Allerton Runners wasn’t far behind him, finishing in 1:01:16. Philip Boynton of Horsforth Harriers came third in 1:01:49.

Alice Leake of Leeds City AC showed her skill on the tricky terrain to win the women’s race in 1:05:56. Faye Birkby of Pudsey Pacers followed her in 1:06:36 with Amy Young of Hyde Park Harriers third in 1:09:36.

There were 837 finishers who were presented with a TNT medal, t-shirt and a generous goody bag. The next task was cleaning off all the mud!