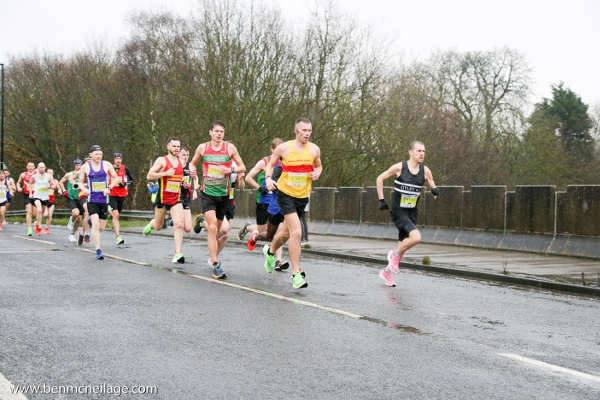 Sustainable Start at Brass Monkey Half

A stiff upper lip was needed as cold and wet conditions made it hard going at the Brass Monkey Half Marathon on Sunday (12 January). Richard Start showed that same resolve as he fought hard to the finish at this eco-friendly race.

The Brass Monkey Half Marathon, like many other events, is moving towards a sustainable model and the organisers, York Knavesmire Harriers, have taken steps in this direction, for example, recycled race numbers.

This is also a ‘must do’ race in which the organisation, atmosphere – a group of vocal schoolkids received high praise – and route are all positives along with the super efficient marshals. The only factor that couldn’t be controlled was the weather!

An electric car led out the race at 10am as runners streamed away from York Racecourse along a fast and flat course. North Derbyshire RC's Richard Start was in the front group and after 5 miles, found himself in a race for the lead. He managed to hold his pace until the end to win in 1:07:33 closely followed by Wondiye Indelbu of Leeds City AC who was second in 1:07:53. Jack Wood of Ilkley Harriers AC was third in 1:08:24.

Lorna Young also of Leeds City AC won the women’s race in 1:18:30 with Charlotte Mason of City of York AC only ten seconds behind to finish in 1:18:40. Georgina Weston of Rotherham Harriers & AC was third in 1:19:11.

There was a reusable water bottle and a shampoo bar for every finisher in keeping with the race’s eco-friendly ethos.

Race director Louise Venables was amongst those praising the runners for their determination and added a vote of thanks to the volunteers saying: “Without their dedicated support we wouldn’t be able to create the welcoming atmosphere that keeps runners returning year on year.”