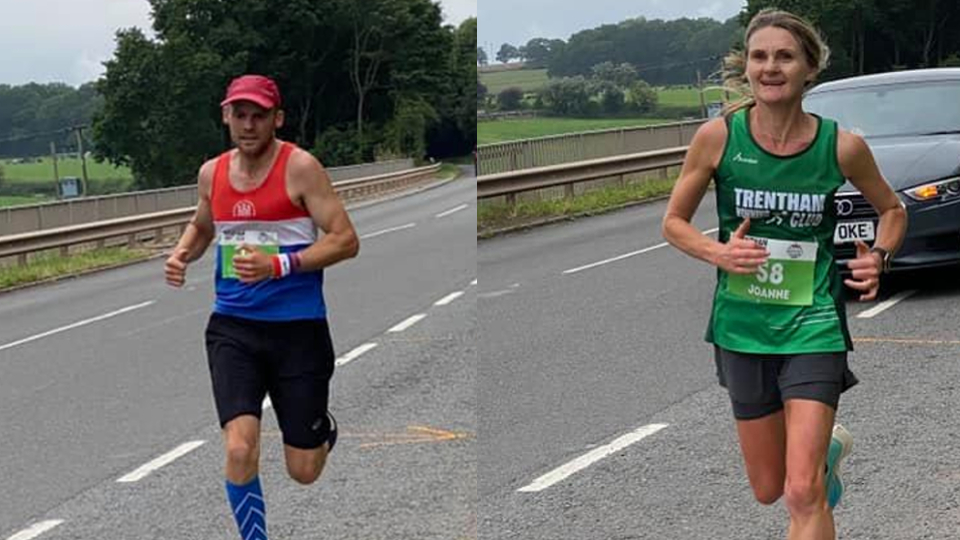 They were in prize winning form at this tough hilly race.

A masterful display of running by Ben Bewley and Jo Stanfield saw them become champions at the Trentham 10K (Sunday 1 August). Not even Beech Caves slowed their stride as they raced for home on a cool day in North Staffordshire.

This was a well organised event from Trentham RC and as race number 11 in the NSRRA programme it attracted a good mix of runners from local clubs who were after points and hopefully, a PB.

The start of a new month was marked by a change in weather with cooler temperatures a welcome relief after sweltering conditions at the Betley 10K a couple of weeks ago. Things were much more bearable as runners set off at 10.30am from Tittensor on a one-lap course that included everyone’s favourite (or maybe not!) – Beech Caves.

An integral part of the race, the climb past Beech Caves is where you grit your teeth and dig in as the lactic acid builds up and the heart rate increases as you near the top. Once at the top they joined the main road and stayed on there for a short while before turning left and spinning out their legs on a downhill section and back towards Tittensor and the finish.

Trentham RC’s Jo Stanfield was the winning female in 41:56. Michelle Buckle of Silverdale RC was second in 42:51 and Amanda Kelly of Stoke FIT third in 43:07.

Next up is the Newcastle 10K on Sunday 8 August and a climb up Black Bank to look forward to.