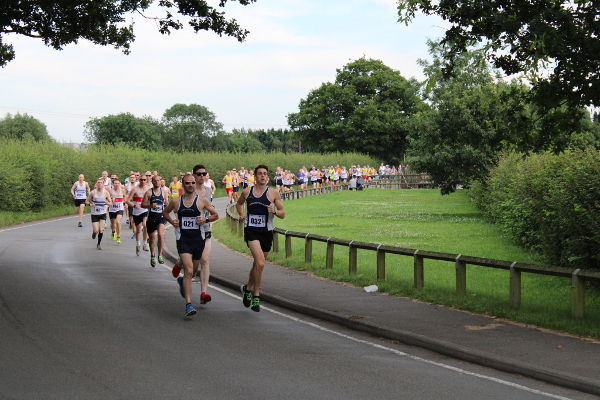 Over 200 runners put their best foot forward despite the heat at The Run on Wednesday (24 July). The thought of the beer garden at the Navigation Inn spurred them on to the finish.

Now in its 11th year, The Run, a 4-mile road race organised by Erewash Valley RC started and finished at the Navigation Inn, Breaston, Derbyshire. It has one of the best event villages in the form of a large beer garden at the rear of this country pub that was perfect for a post-race drink and chip bap.

The race started at 7.15pm and runners followed a 4-mile loop that began with an easy hill at mile 1 to warm up. There was another small climb at mile 2 followed by a fast downhill stretch at mile 3 to turn the legs over; then alongside the Derby canal for the final mile and a sprint to the finish in the beer garden. This was an ideal race for beginners and experienced runners wanting a fast run, a PB or to avoid the queue at the bar.

Aston Perrin of Long Eaton RC was the winning man in 21:13 followed by teammate Adam White in 21:24. Mark Johnson of Leicester Coritanians was third in 21:37.

Jane Potter was the winning lady in 24:19. Eleanor Lunt of Long Eaton RC came second in 25:47 with Sophie Eadsforth of Beeston AC third in 26:45.

There were 201 finishers who re-hydrated with a ‘recovery’ beer along with their family and friends.