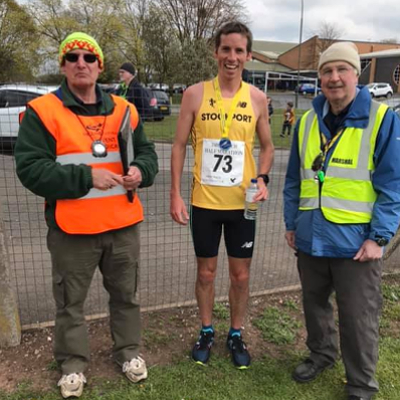 Mountain man Andrew Davies appeared as fresh as a daisy after winning Droitwich Half Marathon on Sunday (14 April). The GB athlete sped around the course followed by an equally rapid recovery.

The elite marathon and fell runner tested himself on an undulating course that included 700ft of elevation around this spa town in Worcestershire. He was part of a 323-strong field that started at 11am from Westacre School and continued along quiet, scenic country lanes, passing through Salwarpe, Ladywood, Porters Mill and Hadley. The route was mainly road apart from a ford that they bypassed via a small bridge. They headed back through Ladywood and Porters Mill to finish at Droitwich High School Athletics Track.

There was a good turnout from the host club Droitwich AC with 26 members taking part - several of whom were first timers - and they came away with more than a few PBs.

There was a medal and technical Tshirt for all finishers and post-race refreshments courtesy of the Rivers Cafe. These were much needed after this hilly race.