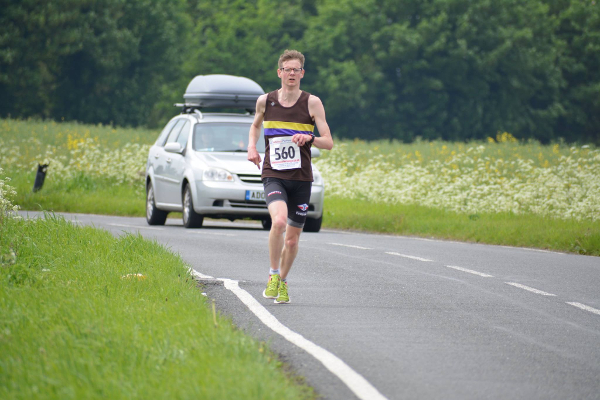 All Eye On Coombs

It was mission accomplished for Duncan Coombs and the Lancaster Bomber flypast at Sunday’s (13 May) Eye 10K - both winners at this fast and flat race.

Coombs of Cambridge & Coleridge AC soared to victory, crossing the finish line in 34:03. On his tail were Phil Martin and Simon Fell of Peterborough AC: Martin was second in 34:39 with Fell taking third place in 35:11.

Jordan Foster of Nene Valley Harriers showed a turn of speed by winning the women’s race in 38:06. She finished nearly three minutes in front of Toni Alcaraz of March AC who was runner-up in 40:57. Eleanor Swire of Cambridge & Coleridge AC came third in 41:05.

The last runner finished in 1:43:41. A full set of results is available on our race listings page.

The action wasn’t confined to the ground as an Avro Lancaster Bomber flew overhead during the event. It was part of the Battle of Britain Memorial Flight based at RAF Coningsby in Lincolnshire who stage regular flypasts for military, private and public events. This Second World War aircraft caught everyone’s eye and made the day that extra bit special.

There were 506 entrants in the 10K and 200 in the 3K Family Fun Run that started and finished at Eye Primary School in Peterborough. They followed a semi-rural route including a section of the Green Wheel cycle route before heading back towards the school. There was an extensive prize list with a medal and a bottle of ‘Joggers Tipple’ beer for every finisher.