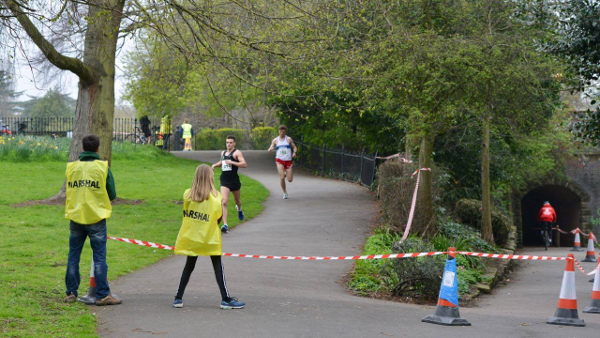 A fine display of running by Adam Peacock saw him take the men’s title at the Regency 10K (Sunday 7 April). This win was another milestone in his London Marathon preparations.

The Wright Hassall Leamington Regency 10K started at 9am from Newbold Terrace East and was run on a mostly flat course that featured Newbold Comyn Golf Course and Jephson Gardens. Organised by Leamington Round Table, it attracts a good turnout each year and raises thousands of pounds for local causes and a few national organisations. Local law firm Wright Hassall was the headline sponsor and they had 20 members of staff taking part plus there was support from Kids Run Free and Spa Striders.

Adam Peacock is a Royal Marine who has represented Team GB in the international biathlon and showed the same level of concentration at the Regency 10K. He was first across the line in 32:20 followed by Alistair McDonnell of Rugby & Northampton AC in 32:34. Callum Hanlon of Leamington C & AC was third in 32:46.

Leamington C & AC took first and second places in the women’s race with Natalie Bhangal winning in 38:35 followed by her teammate Megan Macdonald in 39:27. Anita Howe of Norbrook AC took third place in 40:13.

As part of a growing trend to reduce plastic consumption, this year’s race handed out biodegradable Eco for Life 500ml bottles of water. They also provided edible Ooho water sachets at the finish.

The date for the 2020 event is still to be confirmed.