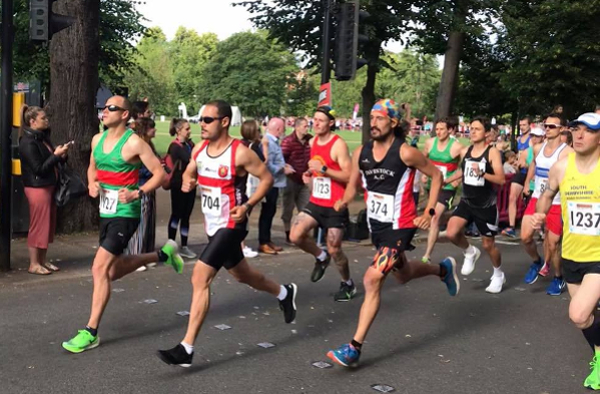 Adam Holland wins in style at Leamington Spa Half

The unstoppable running machine that is Adam Holland continued his winning ways at Leamington Spa Half Marathon (Sunday 7 July). This came the day after his Great Barrow 10 in 10 marathon victory.

After completing his 10 in 10 challenge, Adam decided it was time for another race and turned up the day after at Leamington Spa Half Marathon organised by Raceways Events CIC with Kids Run Free as the official charity partner. Adam is an ambassador for this charity and took part in this event as part of his continuing support.

Launched in 2018, Leamington Spa Half Marathon made a successful debut and organisers hoped to capitalise on that this year. For 2019 there was a revised route, team of pacers and an earlier start time, and a unique elephantthemed medal. The half marathon started at 8.30am followed by the Kids Fun Run at 9am.

Runners followed an undulating, traffic-free course that started and finished in the centre of Leamington Spa. Volunteers handed out sweets and gels, crowds lined the route to applaud and hosepipes and sprinklers kept everyone cool.

Entries have opened for the 2020 Leamington Spa Half Marathon. Visit the website for details.