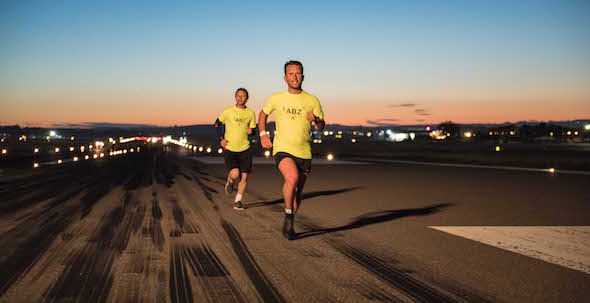 It was ‘plane’ sailing in perfect conditons for the 300 runners lucky enough to get a place in Saturday night’s Runway Run at Aberdeen Airport.

The run, the first of its kind in Scotland, sold out within 36 hours when it was announced earlier this year.

At 10pm, runners and a limited number of spectators ‘checked in’ at the airport, in preparation for a midnight departure down the lit-up runway and back.

Participants had the choice of running the 3.5km route on their own, or as part of a 12-person team, with all times aggregated as part of a team marathon.

The primary aim of the event was to raise funds and awareness for three charities: Befriend A Child, Veterans with Dogs and Sue Ryder Scotland. Shortly after the race, Sue Ryder announced that a ‘fantastic’ £12,000 was raised for their Dee View appeal.

Ryan told runABC Scotland: “I’ve always thought the Aberdeen Airport runway would be ideal for a charity run. It’s a reasonable distance but people probably don’t realise there is a bit of an incline as you head out on the southern end of the runway, so it’s pretty challenging, without being too hard.”

CHC regional director Mark Abbey said: “Ryan has been passionate about putting the Runway Run together and we are delighted to support him. We’ve had tremendous assistance and backing from the Aberdeen Airport team. Everyone has worked very hard to make this happen.”

Sharing their experiences after the event, runners praised both the atmosphere and the organisation of the Runway Run. One runner unsurprisingly called the experience ‘very surreal’.

The main prizes of the night were awarded to the top five fundraisers. They each earned a place for themselves and a guest on exclusive sightseeing flight over Aberdeenshire - likely flown by the Organiser, Captain Ryan himself.

Ryan – who completed the run with a 15th-place finish– said: 'We're absolutely delighted with how the Aberdeen Runway Run went. We've raised over £40,000 for local charities, above and beyond what we hoped for.'

'The organisation of the event went really well. There were a lot of people involved, I can't thank Aberdeen International Airport and CHC Helicopter enough for their support."

He added: 'It would be easy to step back and just let this event be a one-off, but I think we have a responsibility to try to do even better next year. So, the conversation about 2019 has already started, and we really hope this can be an annual event.'