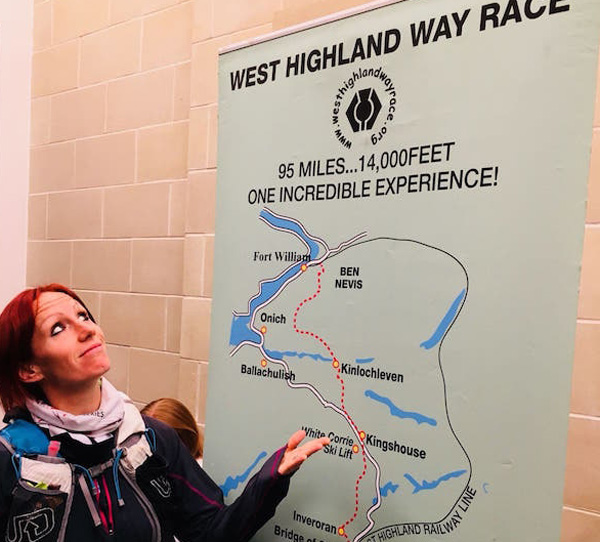 Runners in one of the world’s longest established ultra-marathons, the Ron Hill West Highland Way Race, set off from Milngavie near Glasgow at 1am last Saturday night. Their destination, Fort William – 95 miles (and 14,760 ft of climbing) away – in less than 35 hours.

Such is the extent of the challenge that all runners in the event – which takes in the banks of Loch Lomond, Rannoch Moor, Glencoe, Kinlochleven and Lairig Mor – must have a support crew. Non-elites can also have a support runner to help them get through the final sections.

By the prize-giving on Sunday afternoon, a record 198 of the 240 runners who started had finished the course, but there was no repeat of last year’s record-breaking performance by Rob Sinclair. He won the race in his first ever attempt in an astonishing time of 13.41.08 – more than three hours ahead of his closest competitor.

Winner of the 2017 Highland Fling and three-time winner of the Devil o’the Highlands, Nicola Adams Henry (Garscube Harriers), came from third place at the 40-mile mark to win the women’s division in 17.55.41.

runABC Scotland spoke to one competitor, Jeni Rees-Jenkins (Insch Trail Running Club), about her experience at the race.

A veteran of 35 ultra marathons over the past four years, including a two-lap 100 miler, the WHW was Jeni’s first point-to-point race of this length.

“The event has been on my radar for a few years,” Jeni told runABC Scotland. “I’ve crewed for two years and when you help someone achieve a goal like this, you do feel compelled to have a go yourself!”

Despite the thousands of miles under Jeni’s race belt, her first WHW didn't quite go to plan. “I had a great start, and ran strong – but it wasn’t a day of perfection.”

Her experience makes clear what a challenge the event is, even for seasoned ultra-runners. “I’ve recently been struggling to eat and run over 50 miles and have been battling low iron levels. I felt fairly rough at the 20-mile mark, but after some fruit and flat Coke I picked up. From Achertyre, which is just over half way, I really struggled with fatigue and am eternally grateful to my two support runners, Luke and Ross, who worked hard to drag me to the finish.”

“I enjoyed the later sections the most and was still running strong downhill, but had nothing left for the climbs. Running through a second night I fought hard and have never felt such relief to see a finish line.”

While Jeni’s finish at 25hrs 18min might have been outside her personal target of under 20 hours, Jeni had nothing but praise for the event itself.

She said, “The Ron Hill West Highland Way Race is a wonderful event. It’s one of the most efficiently organised ultra marathons around, providing high-quality support from amazing marshals who all volunteer their weekend just for the love of being involved.”

“The route is beautiful yet challenging – but it’s the people that make it so special. I know I will be back, possibly not running, but helping others achieve their goals.”