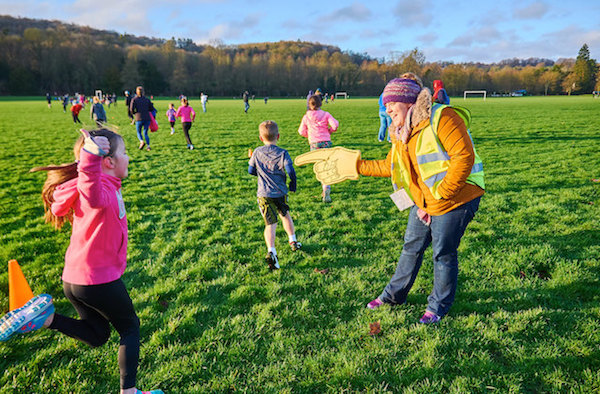 10 candles on the cake for UK’s junior parkrun

With all their events cancelled due to the current Coronavirus crisis, there won’t be any real life celebrations for junior parkrun UK’s birthday – but that doesn’t change the fact that they’ve just turned 10.

The first junior parkrun – a free, weekly 2k event for 4–14 year-olds and their families every Sunday morning – was held in April 2010. Just nine children, their parents and some volunteers walked, jogged, ran and skipped for 4k through London’s Bushy Park.

Junior parkun got its start when Paul Graham, the founder of the Bushy Park run – already a fan of the 5k parkrun – decided to create an event specifically for children and young people.

He reflected: “I felt something new was needed that was specific to children, including those with health conditions. As an occupational therapist and a sports coach I was in a good position to put something together. Just like 5k parkrun there was no pressure and kids who can’t run or walk can still add meaning or value to their community and have fun.

“Unlike many school-led or club-led activities where performances are judged, we made it about taking part with others rather than the actual task of running.”

At the start, junior parkruns were only held monthly, and in select locations, but that soon changed. New events launched in England the next year, with Forest of Dean junior parkrun starting in 2011, followed by Savill Garden in 2012 and Woodley early in 2013.

But it wasn’t until November 2013 and the launch of the Southampton junior parkrun that the children's event took the weekly format we know now.

Soon after that change – in the summer of 2014 – the first junior parkrun in Scotland, Helix Juniors in Falkirk, was launched.

Around the time of the run’s first birthday, event director Lynsey reflected on the event’s beginnings in Helix Park: a new urban space created on former wasteland. “Our first junior parkrun took place the same weekend as the official opening for the whole park. It was a gorgeous sunny day (it doesn't happy very often in the Helix weather bubble!) with 74 amazing smiling juniors and their parents turning up. The core team were amazed by the turnout and it was a sign of things to come.”

Following Helix Park’s success, more junior parkruns followed in Scotland. Stirling was next to launch, then Victoria, Glasgow, at the end of 2014.

Growth has not slowed down. Since the start of 2019, juniors have been making their marks at new events in Barshaw Park in Paisley, Battery Park in Ayrshire and Drumpellier, too. There are now 19 junior parkruns in Scotland, from Aberdeen – the most northerly – to Dumfries – the most southerly.

parkrun remains very keen to hear from those looking to start up junior runs in their own areas and will provide full support and encouragement for potential Event Directors and volunteers.

How many will we have when junior parkrun in Scotland celebrates its own tenth birthday, just over four years from now?