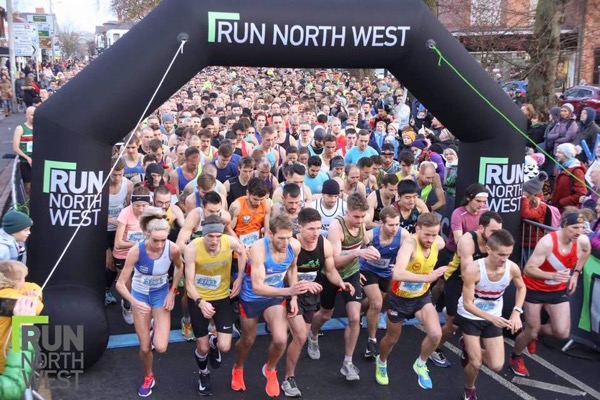 Sunday (25 November) turned out to be a triple celebration for Eilish McColgan as she celebrated her 28th birthday, a first place finish and a course record at the Wilmslow Festive 10K. McColgan was one of close to 4000 runners to compete in what was just the third staging of the event.

Organised by Run North West, who are also behind the Alderley Edge 10K and Trafford 10K, the Wilmslow race has quickly established itself as one of the most popular festive events in the region. For each of its three years, the race has had to increase entry capacity to keep up with growing demand.

Sunday’s field started in Wilmslow town centre then headed out into the surrounding countryside. The point-to-point course moves out of Wilmslow, along Knutsford Road before heading back round to Burleyhurst Lane and finishing on Mobberly Road.

McColgan, who was forced to withdraw from the Age UK Leeds Abbey Dash earlier this month, looked to be close to her best with a commanding performance. She crossed the line first in 32:39, placing her 8th overall, and 50 seconds ahead of her closest competitor, Kate Reed (33:29). Louise Jackson took third in 35:07.

McColgan tweeted after her victory: “Happy birthday to me!! A morning 10k around Wilmslow for breakfast. Happy to come away with a win and a new course record – winter training has officially begun!”

In the men’s field, Callum Rowlinson hit a huge PB to claim first in 31:36 – close to 30 seconds quicker than his previous fastest over 10k. The Sale Harrier had a 15 second lead ahead of Jonathan Carter (31:52) and Andy Benson (31:53) who were locked in an intriguing contest for the remaining podium positions.

Rowlinson also took to Twitter to express his joy at the win and pass on some noble advice: “Delighted to win the Wilmslow 10K this morning. It was a really lovely event. Winning is important but not as important as trying your best and having a nice time. That’s what my mum says.”

I’m sure we can all agree on the wise words from Callum’s mum when it comes to running!