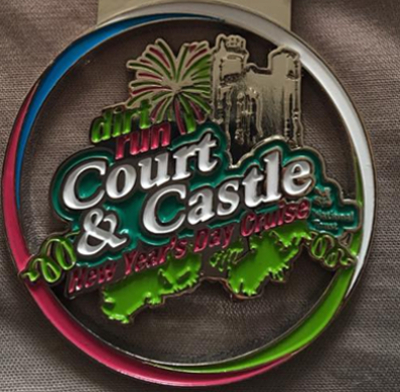 Tour Of Trails At Croombe

The word ‘cruise’ conjures up holiday images featuring blue skies, warm sunshine and a chance to relax. There were a different set of conditions at the DirtRun Court & Castle New Year’s Day Cruise though no less enjoyable for those taking part.

Overcast conditions and a downpour failed to dampen the mood or enthusiasm of the entrants on the first day of 2018. The event was smoothly organised by PulsePursuits and held in the picturesque surroundings of National Trust Croombe in South Worcestershire. The 18th century mansion – Croome Court and parkland includes Dunstall Castle which thanks to an agreement with the National Trust team, the organisers were able to include in one of their routes.

This event had a range of distances to suit everyone, from children to adults, beginners to experienced runners and in between. Dogs weren’t forgotten either as there was a canicross 10k category for the keen owner looking to test themselves or their canine companion on the trails. The options were 2.5k junior run, 5k youth, 5k/10k/15k adults and 10k canicross.

The runners followed a signed and marshalled route with a drinks station on the 10k route and two on the extended 15k route. There was an extra treat for those in the 15k as the route included a loop around Dunstall Castle before heading for the finish - not forgetting the cartoon Elvis character wearing a Santa hat who gave the runners a cheery wave as they went past.

Every finisher was presented with a bespoke medal and goodies and could restore life and limb via a hot drink in the National Trust cafe.