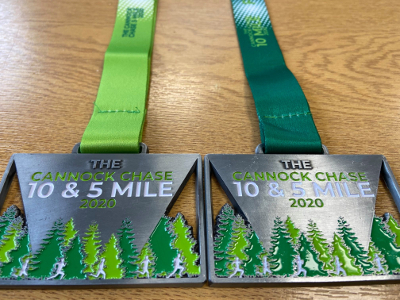 There were hills, mud and new course records at the Cannock Chase 10 & 5 Mile (Sunday 8 March). Runners in both races enjoyed some of the Chase’s finest trails before being rewarded with an attractive, forestry-themed medal.

The 2019 inaugural Cannock Chase 10 & 5 Mile launched to great success and organisers Nice Work looked to build upon that at this year’s event. This was scheduled for the 9 February but Storm Ciara caused a postponment to 8 March where, thankfully, calmer weather enabled it to go ahead.

There was a choice of 10 miles (two laps) or 5 miles (one lap) on an undulating course consisting of gravel trails and paths and a few wet and muddy stretches.

In the 5 Mile, Steve Millward of Gloucester AC was the winner in 29:50 and a new course record. David Dew finished second in 31:04 and Martin Fickling of Mansfield Harriers third in 32:29.

Sarah Thurley of Wrekin Road Runners was first for the women in 40:24: Holly McIntosh second in 43:07 and Saffron Latham of Stafford Harriers third in 45:05.

A hot drink and change of footwear was needed after mud, sweat and trails.