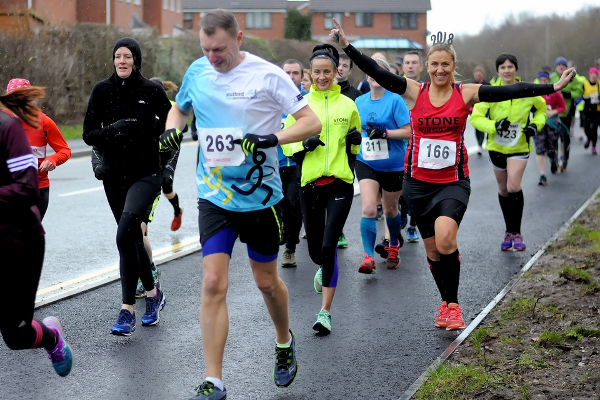 There was no clockwatching at the device-free Vernon’s 'Limp Wrist' 5 mile run yesterday (1 January). Instead, runners guessed their finishing times and tried to achieve them albeit with varying degrees of success.

No running watches, fitness trackers or mobile phones were allowed as the aim was to run ‘bare wristed’ and to a predicted time. The runner who finished closest to their time was the winner. There was no entry fee with runners paying a £5 donation to Katherine House Hospice.

This event was the brainchild of Vernon Olivant who sadly passed away in 2005. He was a member of Stone Master Marathoners and known for his unusual races that together with the cheekily named Limp Wrist run were ‘Vernon’s Stupid Heroes League’. The league was organised in a similar way to the North Staffs Road Runners Association (NSRRA) series but at ultra distance and on multi-terrain.

Everyone set off at 11.15am from Castlefields car park and followed a flat course that included part of the Millennium Way, two loops around the lake and an out and back section along the disused railway line to Derrington. They finished in front of the car park.

The Limp Wrist 5 is now organised by Mike Jones from Stafford Harriers and all donations are given to the hospice in gratitude for the care and attention shown to Vernon.