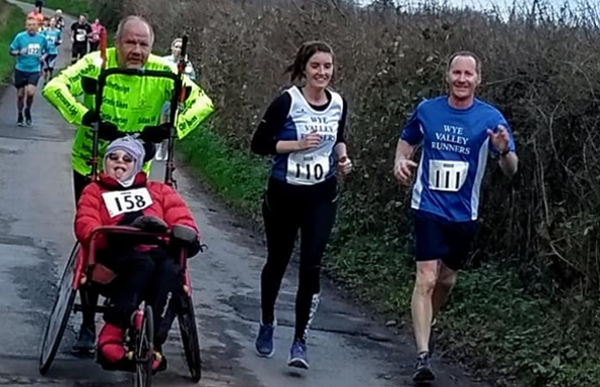 Stephan and Chloe Couture continued to defy expectations with another sporting success. The pair were amongst 200 entrants at the Wye Valley Runners New Year’s Day 10K (Tuesday 1 January).

The father and daughter duo have been competing in triathlons across the UK for the last five years and are proof that having a disability isn’t a barrier to taking part in physical activities. Chloe has cerebral palsy and is visually impaired but doesn’t allow this to spoil her fun and together with her father, hopes this will encourage other youngsters to challenge themselves. Stephan and his wife Diane set up a charity called the Ladybugs Trust which provides opportunities for children and adolescents with a disability to experience the great outdoors.

They lined up alongside others at this annual road race from Wye Valley Runners, held on New Year’s Day in the attractive surroundings of Breinton, Herefordshire. Billed as a counterpoint to the excesses of the festive season this classic 10K on quiet country lanes had something to offer every runner.

Charlie Jones of Cheltenham and County Harriers won the NYD 10K in 34:10 followed by Barry Reynolds of Hereford Couriers in 34:27. Brychan Price-Davies of Brecon RC was third in 34:50.

Donna Morris of Brecon RC was the fastest female in 41:58, making it a first and third place for the Welsh club. Jodie Newell of Wye Valley Runners was second in 42:28 and Naomi Prosser of Hereford Couriers third in 43:03.

Stephan and Chloe Couture of BADGERS RC finished in 53:39.

Overall race assessment? A professionally organised event with positive feedback including rave reviews of the medal.