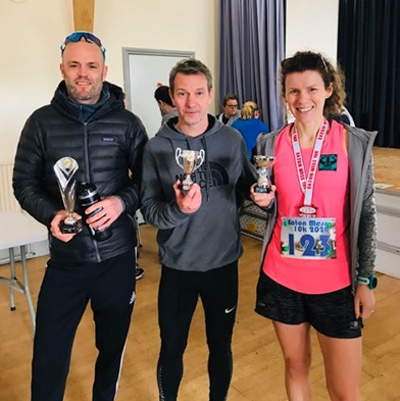 The action was tasty between the two front runners at Sunday’s (8 March) Eaton Mess 10K as local man John Weavell battled with Nigel Haycock. They and the rest of the runners earned their strawberry and cream cones after wading through cold flood water.

The Eaton Mess 10K was organised by fundraising manager Victoria Chinchen and Craig Baxter in aid of Church Eaton Cricket Club, Staffordshire. It was held on country lanes that included several watery stretches but no muddy farm tracks or fields to slog through.

Nearly 200 runners, many from local clubs and groups mingled at Church Eaton Cricket Club waiting for the race to start. There was an added bonus in the form of blue skies and sunshine as they made their way along a picturesque route featuring puddles before heading back to the Cricket Club. They included a group from RunTogether Baswich Run4Fun who were a distinctive sight in their blue t-shirts.

It was a close contest between John Weavell of Stafford Tri and Nigel Haycock of Cannock & Stafford AC with Weavell crossing the line to win the Eaton Mess 10K in 35:45. Haycock was close behind him in 35:57. Tayne Cornelius was third in 38:37.

Victoria Edwards skimmed through the water to be the winning lady in 46:28. Welina Westcott took second place in 47:35 with Lynne Sinclair of Baswich Run4Fun third in 49:31.

There were 186 finishers who enjoyed their medal and the special ‘Eton Mess’ cones at the finish.

Everyone was happy to dive in at the sweet end as expressed by Craig Baxter: “Given the flooded stretches of the route, the spirit and humour of the runners was amazing. There was a great atmosphere during the whole event.”