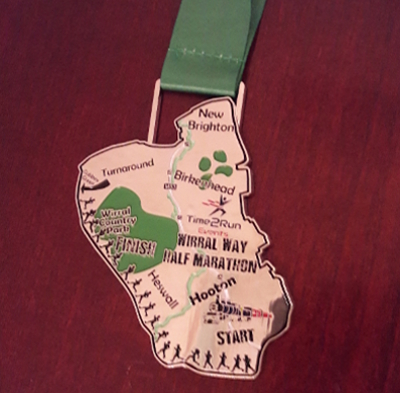 A scenic trail, coastal views and ice cream were the treats for runners at the Wirral Way 10K (Saturday 13 July) and Half Marathon (Sunday 14 July). The Time2Run Events ice cream van was a winner on both days.

The two races were organised by Time2Run Events and were held on a trail path along the Wirral Way – the site of the old Hooton to West Kirby railway line. Popular with walkers and cyclists as well as runners it was an easy to follow route that offered superb views across the Dee Estuary to Wales.

Saturday’s sold out Wirral Way Summer 10K used an out and back route from Thurstaston to West Kirby and included a feed station at the turnaround point. Finishers received with a bespoke medal and free, unlimited digital photos along with cake and ice cream.

Sunday’s race, the Wirral Way Summer Trail Half Marathon followed a flat, waymarked trail course from Hooton to Thurstaston. There was a choice of start times between 9am and 9.45am and four feed stations on the route where cheerful volunteers handed out water and electrolyte drinks.

Muggy weather made it hard going for your correspondent and many others as we completed our mini tour of The Wirral Way. The humidity didn’t pose a problem for William Barr of UTS Run Club who was the winner in 1:20:06. Nor did it stop Emily Jeacock of Vegan Runners becoming the winning lady in 1:32:58 - after a week spent hiking up six mountains in Scotland that included Ben Nevis.

There was a bespoke medal featuring a map of the route, cake and a free ice cream or lolly.

Time2Run Events will be returning to Wirral Country Park on the 17-18 August for their 24-hour event.