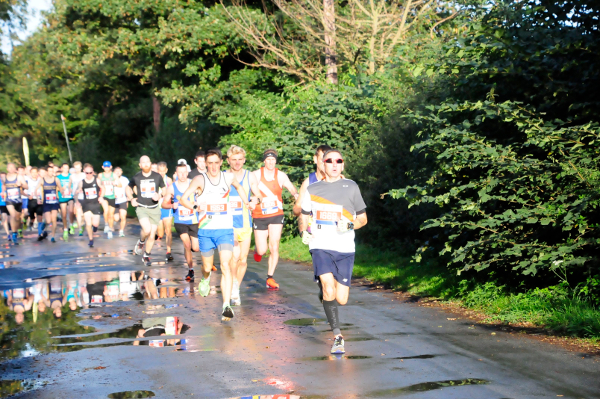 A new autumn date proved to be a good move for the On Shrewsbury Half Marathon (Sunday 6 October) as runners and spectators made it a day to remember. Even the weather played its part.

Heavy rain in the week leading up to the race caused water levels to rise requiring a minor adjustment to the start at Shropshire County Showground and the final half mile of the course. However, this was the only change as the route remained the same including the infamous Wyle Cop.

Dry and sunny conditions formed a backdrop as Mayor of Shrewsbury, Councillor Phil Gillam set everyone off at 9am. Onwards they continued, through the town centre with its steep narrow streets and various historic landmarks before heading out into the Shropshire countryside. Later they turned back and towards the finish at the Showground.

Competition was fierce in the men’s race as Tom Roberts and Jack Pickett were neck and neck for a large section of the route. Roberts of Meirionnydd RC managed to pull away to win in 1:09:54 with Jack Pickett of Wolverhampton & Bilston AC the runner-up in 1:11:56 - an improvement on his fifth place last year. Callum Welman was third in 1:16:16.

It was a different story in the women’s race with Jackie Skinner of Fulham RC dominating the race, winning in 1:21:27. Rachel Sweatt of Witham RC was second in 1:22:49 and Elliw Haf of Eryri Harriers third in 1:27:48.

SRG pacers helped many runners achieve their target times and local residents lent their support, clapping and cheering them every step of the way.

Organisers Joe Williams and Rebecca Richardson summed it up perfectly, saying: “We would like to thank all our runners and spectators for making the day such a great success.”