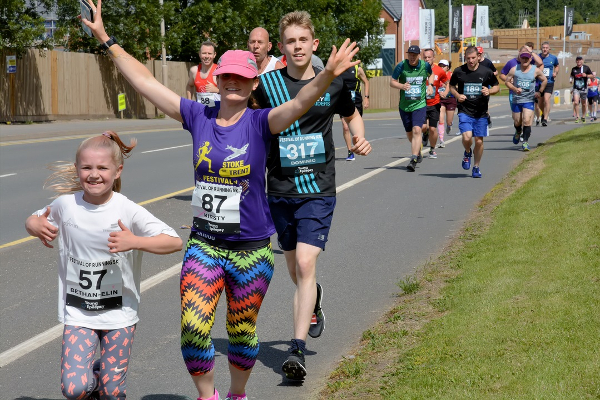 Stoke on Trent Festival of Running soars to success

There was a big Potteries welcome for everyone who took part in the Stoke on Trent Festival of Running yesterday (Sunday 7 July). They enjoyed the hospitality, support and the course. Apart from Potters hill!

The sun shone on the home of Stoke City FC as runners young and old, their friends and families mingled outside the bet365 stadium. Bill Mac and his team of volunteers were amongst them, ensuring everything was in place ready for the start of the event.

There was a Kids Fun Run at 10.30am and the youngsters completed 1.1km (two short laps) to cheers and applause from the marshals that included one lady who exchanged high fives with a little girl to the delight of her mother. They received a medal and goody bag for their efforts and, hopefully, an ice cream from the van.

Then it was the turn of the adults. They lined up outside the stadium, ready for the start at 11am before streaming away from the start to follow a one lap (5K) or two laps (10K) route that included Potters hill near the finish. A team of pacers helped runners in both races as did the smiling, enthusiastic marshals who encouraged everyone as they passed.

Paul Williams of Newcastle (Staffs) AC was first across the line in the 5K in 21:14; Fiona Bradley of Stone MM was the winning female in 23:01.

Feedback has been very positive with the marshals/volunteers singled out for praise. It appears the decision to concentrate on the 5K and 10K events (planned half marathon and marathon events were cancelled) was a successand many runners have vowed to return next year.