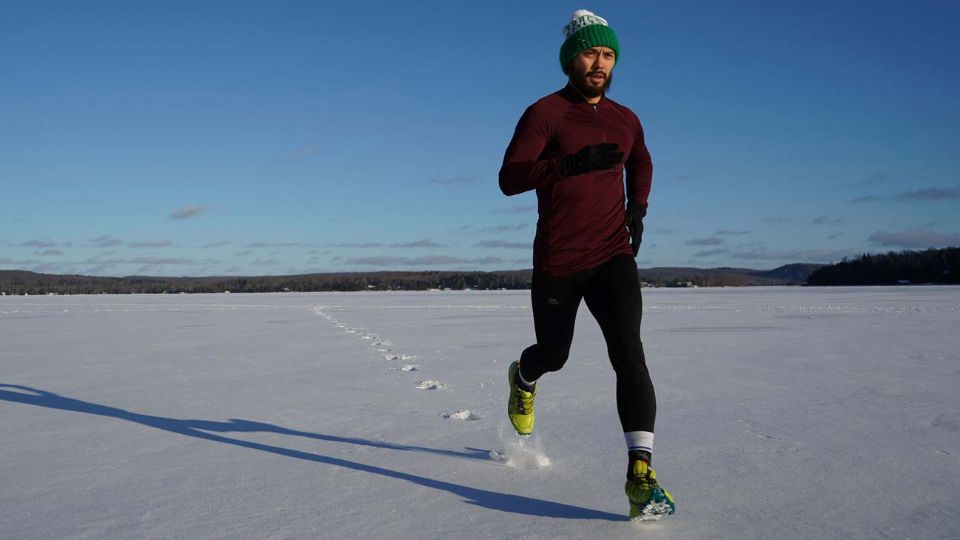 For some runners, the cold bite of winter is the time to retreat indoors and to cut down on the sessions and perhaps even take some to the gym treadmill. For others - myself included - the freshness of the air, the shimmering street lights and - sometimes - a snowy crunch underfoot make it one of the most rewarding seasons to run.

I find there are few more satisfying sessions than a tempo 10 miler on a freezing night that leaves steam billowing off your shoulders as you make it back to the front door. But, if you are like me and simply cannot resist the temptation of a refreshing winter run, then take precautions.

Running in the winter can also be a much more dangerous activity than in brighter seasons, so to ensure you can still enjoy your runs, follow the advice below.

If you take just one thing from this article, make it wear something luminous or reflective when running in the dark. On the course of your run, be it through city streets or on country lanes, there will be several roads to nip across. When you are walking at a pedestrian rate, you have a far greater window of reaction when confronted with car drivers or even cyclists. And indeed, so do they. That window is substantially reduced when you are running, so it is wise to reduce the risk of any contact when you are certain to be the one who comes off worse. Be seen and not hurt.

There are a whole range of visibility items to choose from - armbands, gloves, ankle straps. The best choice though would be the jacket. You won't win any style awards for a luminous yellow jacket, but it's a very safe option (although I like this year's Brooks Nightlife colour - brite green. Possibly more aesthetically pleasing and still highly visible). If you want to be extra vigilant, you can even try a head lamp. These are widely available from most running outlets and are not uncomfortable to wear.

Roads can be slippier in winter. Often they are wet, sometimes they are icy. When they are icy, it's probably wiser to seek an alternate route, as anyone who has ever cracked a hip on the pavement would gladly testify. In fact an off-road route utilising a grassy surface at a local park (or your local golf course) is often a good choice. It's handy to have a nice and grippy pair of rubber studded shoes at your disposal to give yourself the extra option in winter. The regular road 'flats' will not find muddy parklands easy terrain.

As well as the obvious traffic concerns, there are so many more hazards around in winter, which you merrily bypass in summer without noticing. Keep a vigilant eye out for potholes, raised slabs and traffic cones on the pavements and roads. Low hanging branches from trees are also a common problem and can cause a nasty eye injury. If you couple this with the threat of people suddenly emerging from doorways or from behind cars or kids on bikes hurtling out of driveways, then the risks are quite high. It's best to keep as close to the middle of the pavement at all times with your eyes fixed on the pavement ahead. Like many, I enjoy running whilst my iPod blasts out the tunes. If you're running on the roads during the winter, it's probably best to leave the music indoors. Or at the very least only plug in one earphone or use a very low volume. In the darkness, your vision is already seriously compromised. It's safe practice not to sacrifice another sense.

Everyone feels a surge of adrenaline when running and it can lead us to make poor decisions, like running across a road when it is unsafe. Stopping at a pedestrian crossing can sometimes be a little frustrating and interrupt your rhythm. But the risk far outweighs the reward. So, save your heroics for race day when road closures and marshals are around. Also, although incidents of violent attacks on runners are thankfully rare, it is wise to employ some common sense to keep it that way. There have been instances of attacks on runners in winter, particularly female. So, it's important to lower the risk. Firstly, try and run with someone. Groups are very unlikely to be targeted by hooligans. Secondly, try to run in well-lit areas. Crimes are uncommon in broad daylight - there's a reason for that. Finally, use your instinct. If somewhere feels dodgy, then it probably is. Don't shy away from doing an about-turn and shortening your run if you feel your safety is at threat.

If you do have a mishap on slippy roads or simply pull-up injured, don't leave yourself stranded. It's sensible to carry money for a taxi or a travel card in a zipped pocket or bumbag to ensure you can always get home no matter what. It's also vigilant to carry some ID with you, say a library card or something relatively innocuous. You might not want to take a valuable piece of ID out running with you - like a driving license - but it's good practice to have something with you that can be used as ID in case you have a more serious accident. Best of all are runner ID tags (Cramtags have received good publicity) which are easy to wear, so a very good investment.