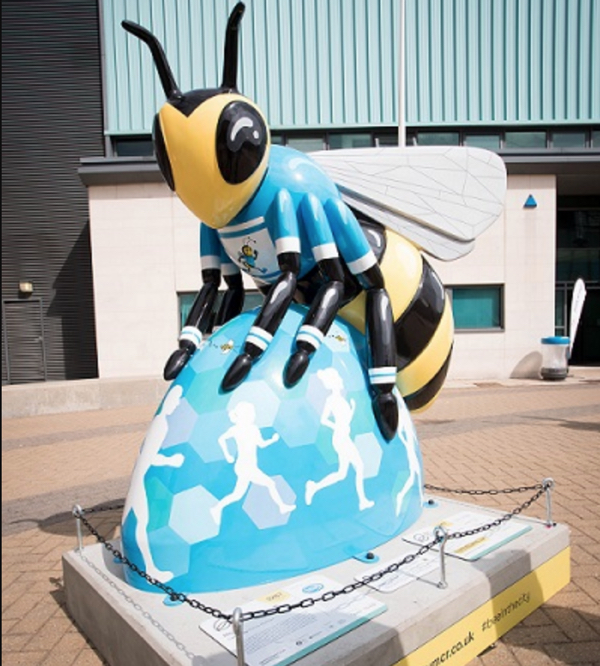 Sports Tours International has got behind the Manchester’s Bee in the City, a mass participation public art event launched last week. As part of the initiative, over 100 super-sized bees have been placed along a specially designed trail, which runs the length and breadth of the city.

Each Bee has been designed by a different artist and celebrates the unique buzz of Manchester, from its industrial heritage to its vibrant music scene. Over 100 individually-designed super-sized Bees and over 130 equally artistic little Bees (created as part of the Bee in the City Learning Programme) will be on show as you follow the trail.

Sports Tours’ support means they are one of the event’s sponsors and have their own Bee, which was unveiled on Monday 23 July at the Etihad Campus. The bee has been named ‘Mo’ in remembrance of a wonderful woman, Mo Done, who was an inspirational, great Salfordian, a supporter of many Manchester charities and an integral part of Sports Tours International’s business.

The Bee itself will become synonymous with Sports Tours' new charitable initiative ‘Running Bee Foundation’ which will donate funds from its organised running events to communities across Manchester and the North West to help them promote health and wellbeing and in the fight against childhood obesity.

Chris Bird, CEO of Sports Tours International said “Our Bee in the City is the inspiration of one woman Mo Done, who sadly passed away on 7 July 7. Mo loved to run, completed many marathons around the world and had a huge positive influence on our business. The legacy of our Running Bee ‘Mo’ will be announced shortly and I am certain that our City will embrace the spirit of Mo Done through our Running Bee initiatives.”

The Bee in the City trail launched on 23 July and will run for nine weeks, with the route set to include famous landmarks, cultural hotspots, and some of the city’s undiscovered gems.

More details of the Bee in the City trail can be found at the Sports Tours International website.