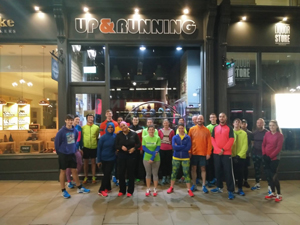 Social Run Group With Up & Running

SRG (social run group) powered by Up & Running, fuelled by you.

SRG is your local weekly run based from all of the Up & Running stores around the North of England, from Chester to Newcastle, from Manchester to Sheffield.

Being part of SRG is free, fun and friendly. All abilities are welcome, bringing like-minded people together to enjoy every step with a smile on their face. Each group is encouraging and motivating with zero pressure. One community all striving for the same goal to get fit and stay healthy.

Each SRG meets at your local Up & Running store and we stick together on the routes, the faster runners loop back to the rear of the group and support every runner. The groups range from 10-120 runners and no-one gets left behind! The runs are led and supported by Up & Running staff. Our motto is #RunTogether

More information for locations and times of SRG can be found online at the Up & Running's dedicated Find Your Next Run page.

SRG can be found at the following locations:

Previous & Next Service of the Week