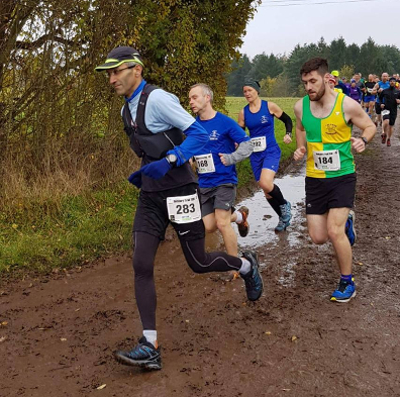 Runners snap to it at Beckbury Trail

Nearly 300 runners got their teeth into Badgers Bite Hill as well as grinding their way through mud at Sunday’s (17 November) Beckbury Trail. The cake at the finish had restorative powers.

This 5.6 mile (9K) race was organised by Lawley RC and is one of three club events along with the Lawley 5K Fun Run and Shifnal Half Marathon that are held off-road. The Beckbury Trail took place in a stunning location, passing through woodland and across fields with views to the Shropshire countryside. It was almost all off-road apart from a short road section and there was a drinks station at halfway.

The organisers had arranged for a minibus to transport runners to the start. There was a short, concise briefing before everyone streamed away at 11am to follow a well-marked and marshalled course. They were treated to rolling trails carpeted in leaves of varying colours and mud of which there was plenty. Lying in wait was the infamous Badgers Bite Hill but there was some relief in the form of a downhill stretch to the finish on the main field.

Daniel Maskew of Wolverhampton & Bilston AC beat the hill and the rest of the course to win in 34:37. Ben Nutley was second in 36:31, just squeaking in front of Todd Quiney of Diabetes UK Athletics who finished in 36:31.

Lucie Tait-Harris of Telford AC was the first female in 41:13. Emily Sanders was the second female in 43:55 with Beckie Houston third in 44:38.

Beckbury School Association sold bacon and sausage baps with all proceeds to the village school and for those with a sweet tooth, cakes were available to purchase. The cake sale raised £345 that was divided between several charities.