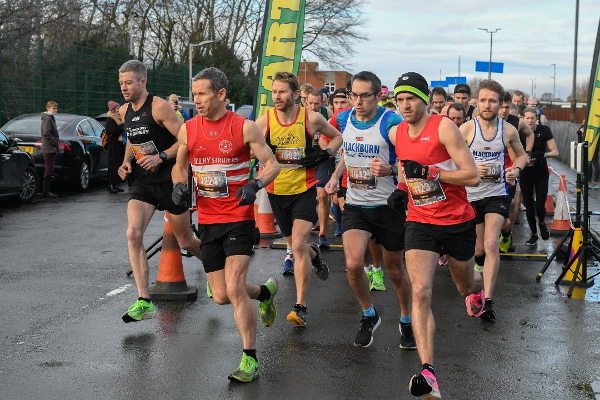 There was an outstanding run by Simon Croft to take first place in the Central Lancashire New Year Half Marathon (Sunday 5 January). He made an impressive start early in the race season.

Organised by Fylde Coast Runners, their first half marathon of the year attracted over 400 participants keen to undo the damage caused by the Christmas and New Year celebrations. The recent floods had eased and the weather was relatively mild for January as they headed towards Preston and the 11th staging of this race.

The runners lined up waiting to start and were sent on their way at 10am to follow a scenic route on open roads through villages and hamlets. There were a few hills to deal with but the course was ‘flattish’ as described on the event website and well marked and marshalled throughout. There were water stations at 4.5 and 9 miles and a commemorative medal at the finish along with post-race refreshments.

Simon Croft was first man home at the Christmas Day Preston parkrun and followed this with another first place to kick-off the New Year. The Red Rose Road Runner won the Central Lancs Half Marathon in 1:12:59 with a gap of nearly 5 minutes between him and David Birtwistle of Blackburn Road Runners. Birtwistle finished in 1:17:41 with Shaun Heys of Trawden AC third in 1:19:27.

Katherine Fitzpatrick was dominant in the women’s race, crossing the line in 1:28:19. Melanie Koth of Lytham St Annes RR Club was second in 1:31:39 and Jackie Bradshaw of Halesowen A & CC third in 1:32:00.

The next event from Fylde Coast Runners is the Great North West Half Marathon on 16 February. Equally good for burning off excess calories.