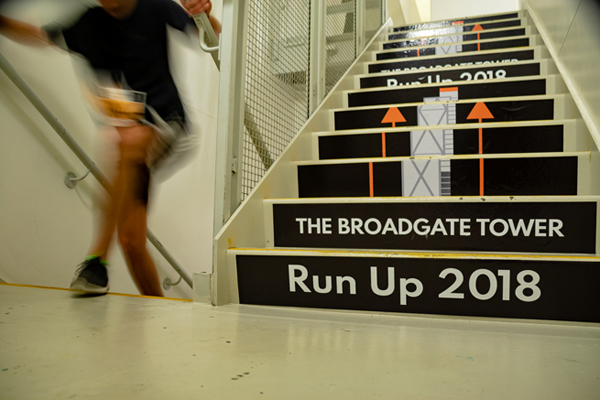 The Broadgate Tower Run Up took place on Saturday (24 November 2018) and proved to be an incredible day of stair climbing for over 300 runners of all ages and abilities. The London run was the semi-final of the prestigious Vertical World Circuit (VWC), a nine-race calendar of premier skyscraper races.

It was a true festival of vertical running featuring multiple climb options, from the Single Climb of 35 floors through to a ¼ Vertical Mile triple climb and a thigh-burning Vertical Mile of 12 climbs, 420 floors and over 10,000 steps.

The day saw individuals and families take on their own personal challenges while the world’s top stair climbing athletes showed what they are capable of in the Elite races. Every competitor showed commitment and determination as they took on the 877 steps of The Broadgate Tower and the atmosphere was superb from start to finish.

Highlights included the Firefighters Wave, which saw firefighters taking on multiple climbs in full firefighting kit and breathing apparatus for the Firefighter’s Charity. There were also children as young as eight taking part in the Family Climb, with big smiles on their faces as they made their way to the top, and a StepJockey corporate wave led by CEO Zarir Vakil, inspiring clients to bring their challenges out of the workplace and take part in a real-life stair climbing event.

Elite stair climbing athletes from 17 countries raced up the Broadgate Tower with the men’s race a hard fought affair. Spain’s Ignacio Cardona Torres claiming his first win on the VWC with a time of 00:04:02, just five seconds ahead of Briton Mark Howard, who crossed the line in 00:04:07. Japan’s Takaaki Koyama followed closely with a time of 00:04:14.

The women’s race was another thrilling battle, with top UK runner Sarah Frost – last year’s winner and The Broadgate Tower Run Up record holder – crossing the finish line just one second ahead of Spain’s Maria Beltran. Sarah beat her own record by four seconds with a time of 00:05:04, while Maria clocked 00:05:05. Japan claimed another third place with Yuko Tateishi closing the podium at 00:05:09.