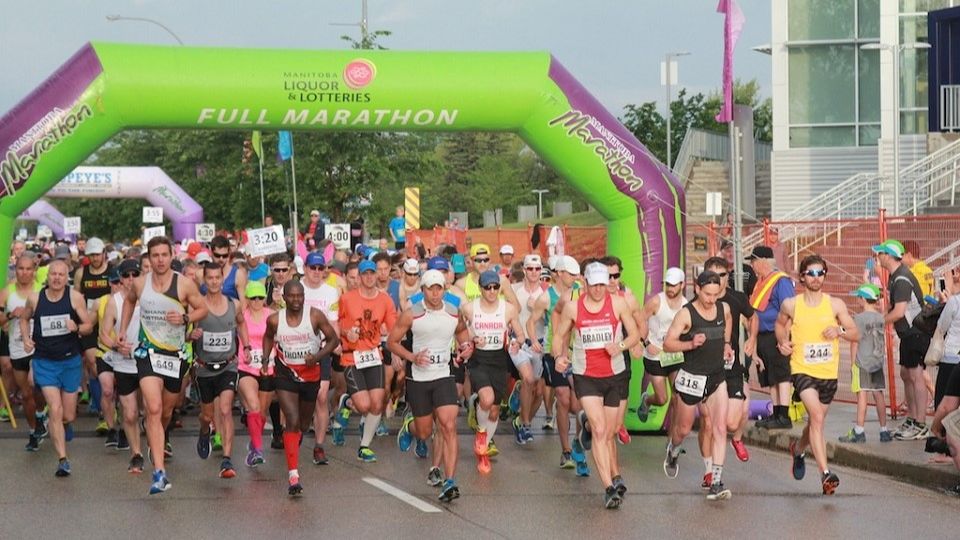 Manitoba Marathon called off mid-race as temperatures soar in Winnipeg

The 591 runners in last Sunday's (19 June) 44th annual Manitoba Marathon in Winnipeg, Canada faced exceptionally hot weather conditions and the race organisers took the unusual decision to cancel the event mid-race for safety reasons. Although it was only around 23C at the 7:00am start, within an hour it was 33C and heading for 40C, with very high humidity.

Police around the course stopped the race about 90 minutes after the start and race director Rachel Munday issued this statement: "We certainly thought that the wind was going to be our friend and cool people on the course. The guidelines say even the fittest runner, once you hit the low 30s (Celcius) shouldn’t be running a long distance. It’s too taxing on the body, so we made the very, extremely difficult decision to stop the race.”

Not all runners obeyed the instruction and some still completed the full marathon amid the confusion as the incorporated Canadian Half Marathon Championships was won by current Canadian marathon record holder (at 2:09:25) Cameron Levins (Portland, 1:03:23) and the former Canadian 10,000m record holder Natasha Wodak (North Vancouver, 1:15:20) – whose half marathon PB is 1:09:41 set in 2020.

It is obvious from these results that the high temperatures adversely affected times for the elites and this would have been magnified further down the field. But what is the actual effect of running in hot conditions? runABC South writer and coach Alan Newman has taken a look at the topic for us...

Alan reviewed various studies on the topic and the consensus was that the optimum temperature for distance running performance is 7C-15C – anything higher and blood flow is redirected from working muscles to the skin to aid cooling. There is only so much blood to go round, so the net effect is less efficiency, which results in slower times. This is first noticed physiologically as a higher heart rate for a given pace than in cooler weather conditions.

While most detailed studies focused on elite performers, the six Abbott World Marathon Majors discovered that most non-elite runners (3:30 to 5:00 times) performed best at 7C and a major study of 50 years of Boston Marathon results found the optimum temperature to be between 8C and 15C.

It seems that 15C is the tipping point for most of us and there is a direct correlation between rising temperatures and falling performances beyond that threshold. The rate of slowing differs between elite athletes (sub-5:45/mile pace) and non-elite (7:30/mile pace plus) and there was a drop in pace of one second/mile for each 1C increase in temperature for elites and up to five seconds/mile/1C for the masses in the studies.

The conclusion is obvious. If it's hot we need to rethink our strategy and pace ourselves accordingly. Just one degree Celcius above the optimum 15C could add more than two minutes to our marathon time. At 25C that adds over 20 minutes and at 30C we are looking at an extra half an hour – or perhaps the sensible option of not attempting to race at all.