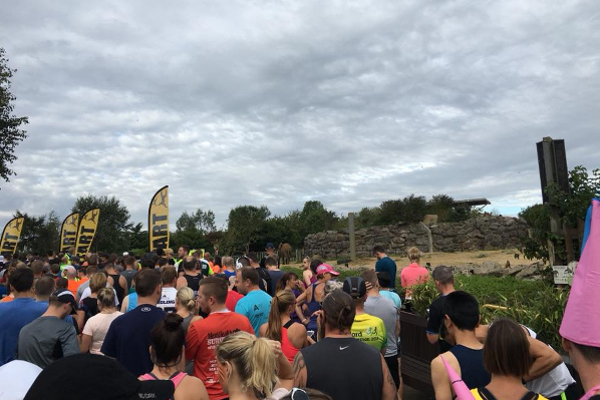 Yesterday's (Sunday 9 September) Colchester Stampede Half Marathon had the honour of being the only race where runners were joined by elephants and rhinos at the start. They charged their way around this new event at Colchester Zoo.

Colchester Zoo is set within 60 acres of parkland and has over 260 species from around the world including zebra, giraffes, leopards, penguins and orangutans. It hosts a 10K for homo sapiens and this year, decided to organise a half marathon on behalf of charity Action for the Wild.

The race started at 9am next to an animal enclosure before runners set off through the grounds of Colchester Zoo, completing a kilometre of the distance before heading out onto closed roads. They were clapped and cheered every step of the way as they completed an undulating course that finished back at the zoo.

Stephen Skinner was King of the Jungle, winning the first Colchester Stampede Half Marathon in 1:15:20. Andrew Green of Dartford Road Runners was second in 1:17:30 and Caspar Le Fanu of Woodbridge Shufflers third in 1:21:24.

In the women’s race, Jemma Clarry of Saint Edmunds Pacers was Queen of the Jungle in 1:35:05. Emma Mortimer followed her in 1:36:37 with Stephanie Hughes of Braintree & District AC third in 1:37:23.

There was a superb themed medal, T-shirt and goody bag for every finisher plus free entry to the zoo, giving runners the chance to spend quality time with the animals!