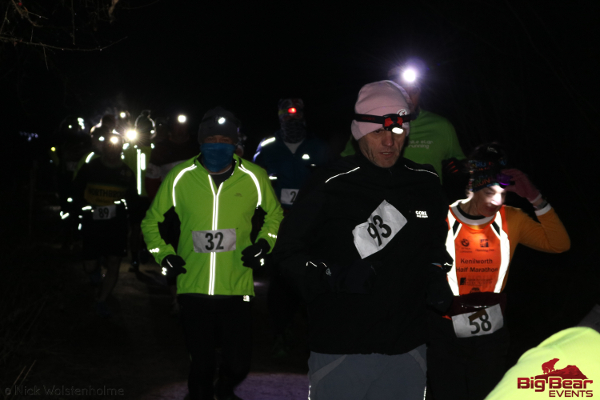 The inaugural Gato Sports Head Torch 10K (Wednesday 23 January) was a shining success despite the icy conditions. There were thrills but no spills at this sold out run.

This was the first race in the Gato Sports Winter Night Series, organised by Big Bear Events that was held on the Great Central Way in Rugby. Evening races such as this are becoming popular with runners looking for something a bit different and this one didn’t disappoint with a two lap course, illuminated medal and hot soup. The latter was especially welcome on a night when the thermometer dropped below zero!

A forecast of ice almost prevented this head torch 10K from making its debut; however a final inspection of the course revealed it to be ‘runnable’ with only a few small slippery areas to be aware of. Sprinting for a PB was not recommended.

At 7pm, the head torch procession set off on a two lap course along a disused railway that included a few 200m zig zag sections at the end. Mark Raddan of Bedford Harriers was first across the line in 38:52 and Emma Atkins the fastest female in 42:40. Both were presented with a LED Sports Vest courtesy of the sponsor Gato Sports.

Several runners managed a PB and for others, completing their first night run was a reward in itself. All finishers received a glow in the dark medal and neck warmer and thawed out with a bowl of homemade soup from Lean on Liddle – Mobile Bar.