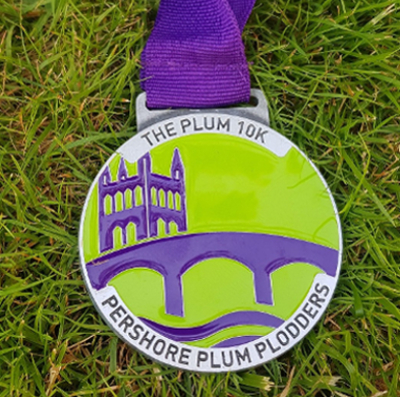 The record number of runners at the Pershore Plum 10K on Sunday (25 August) put a revised route to the test. They were generously rewarded for their efforts!

Such is the popularity of this race that resulted in a surge of entries, causing the organisers, Pershore Plum Plodders to increase their race capacity to 400. This reached its limit on the 15 July. They then set up a waiting list to handle the continuing demand for places.

They also made adjustments to their 10K course; increasing the start by an extra 500 metres while reducing the finish to a shorter lap around Abbey Park and the final 100 metres downhill to the end. Both these changes met with wholehearted approval from the runners.

400 set off on a very warm morning in Pershore along a multi-terrain route that combined the best of town and country. A large contingent of marshals cheered them on – 82 members from the Plodders were on duty on the day). The Anglo-Saxon Pershore Abbey made an imposing backdrop as they sprinted the final few yards towards the finish line.

Stephen McGrath of Low Fell RC was the winner in 35:01 followed by Mark Appleton of Bromsgrove and Redditch AC in 35:44. Neil Laurenson of Black Pear Joggers was third in 36:34.

Sian Powell of Black Pear Joggers won the women’s race in 42:26. Katie Coleman of Almost Athletes was second in 44:01 and Annabelle McCourt of Evesham Vale RC third in 44:09.

Every finisher was presented with a distinctive medal; new look technical t-shirt and a top quality goody bag (which included a plum) courtesy of sponsors and donations. Four local charities benefitted from this sold out event.