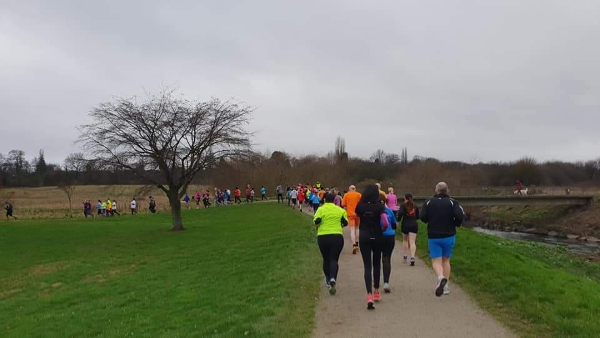 Over 500 participants got the New Year off to a flying start at the Perry Hall parkrun (Tuesday 1 January). The large turnout proved to be a challenge for the results team but they were more than up to the task.

Perry Hall had seen a record attendance of 223 runners on the 1 December, as the event celebrated its fourth birthday. That unexpected present made it an extra special day for everyone involved; however, that figure would be exceeded in dramatic fashion on the 1 January.

Every parkrun can choose to host an extra event on New Year’s Day and Event Director Emma Hawkey and her core team opted to do so. There were a few logistical issues to consider namely that of runner numbers and after looking at previous years, a projection of 350 participants maximum was made.

The New Year’s Day parkrun started at 10.30am and involved the completion of three laps on tarmac, grass and gravel paths around Perry Hall Park. It was busy day for the volunteer team as 561 runners crossed the line – double the projected attendance. The mammoth field saw Perry Hall proudly claim the biggest percentage increase in numbers out of 330 parkruns taking place on 1 January.

Feedback was overwhelmingly positive, praising the course, the runners and the volunteers as well as the incredible turnout. This small but mighty parkrun has a community feel and is best summed up by Run Director Phillip who said: “Perry Hall parkrun never fails to engage all, inspire and positively impact on those taking part.”

The parkrun team thanked everyone for making the event a huge success with additional thanks going to the Friends of Perry Hall Accredited Country Park whose support has been invaluable.