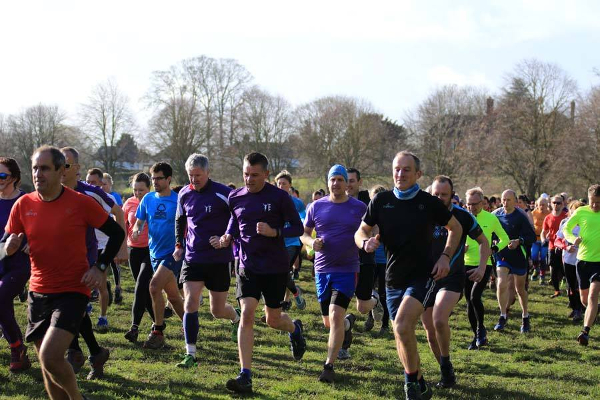 It was a numbers game at Evesham last Saturday (9 March). They achieved their goal of more than 200 people at their record-breaking 200th parkrun.

At 9am on a sunny yet blustery morning in Worcestershire, 366 parkrunners were sent on their way by Evesham Mayor Mark Goodge. They followed a two-lap course starting near Hampton Ferry and continued on a mixture of stone tracks, gravel paths and grass along the tranquil River Avon. Muddy conditions underfoot didn’t stop several parkrunners from posting a PB.

Ben Allen was first home in 19:25 – a new PB for him. Tamsin Bowden of Evesham Vale RC was the first female in 22:06. Her teammate Carmine Petta finished 100th overall in 26:27 and achieved his 100 parkruns milestone.

People travelled from near and far to take part at Evesham. They included two members of the team who founded this parkrun in 2015 – Robert Hale and Colin Tether and plenty of local support from Evesham Vale RC and Evesham Vale Triathletes Juniors. Amongst the happy throng were Worcester Vegan Runners and two Couch to 5K groups – Sam’s Runners, Tracey’s Angels, Dev’s Devils and Pershore C25K Group 1.

There was an Evesham 200 fridge magnet as a memento of the event followed by a sumptuous hot chocolate at Raphael’s Restaurant and Cafe. These were a fitting reward for everyone’s hard work and efforts at this special parkrun especially for the 20 stalwart volunteers who made it all possible.

Organisers thanked Mayor Mark Goodge for being the official starter at Evesham. Mark has promised to return and run.