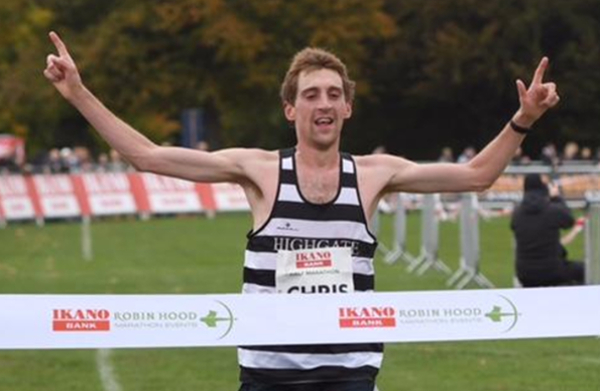 Rainsford hits the bullseye At Robin Hood Half Marathon

It was double top for Chris Rainsford at Sunday’s (30 September) Ikano Bank Robin Hood Half Marathon. He marked his debut in the Nottingham race with a win and a PB in perfect racing conditions.

The Highgate Harrier has been in impressive form on the track and cross country and can now add road to his collection. He won the 2018 Half Marathon in 1:07:54 and was delighted with his victory and a new PB and will return next year to defend his title. Alastair Watson of Notts AC was second in 1:09:28 followed by team mate Anthony Woodward in 1:11:22.

There was also a PB for Katherine Wood of Sale Harriers who won the women’s race in 1:17:34, smashing her current record by more than two minutes. Sophie Cowper of Rotherham Harriers took second in 1:18:46 with Charlotte Firth of Windsor Slough Eton & Hounslow AC third in 1:23:37.

It was a busy weekend as nearly 9,000 runners took part in the Mile Challenge, Half Marathon, Mini Marathon and Corporate Challenge. The half marathon entrants were helped towards PB’s by Ali Galbraith and his team of pacers while Moosey, the Ikano Bank mascot provided encouragement to runners waiting to start the Mini Marathon.

Entries opened for the 2019 event are now open and there is a special ‘Early Bird’ price available until midnight 31 October. To register, visit the Ikano Bank Robin Hood Marathon Events website.