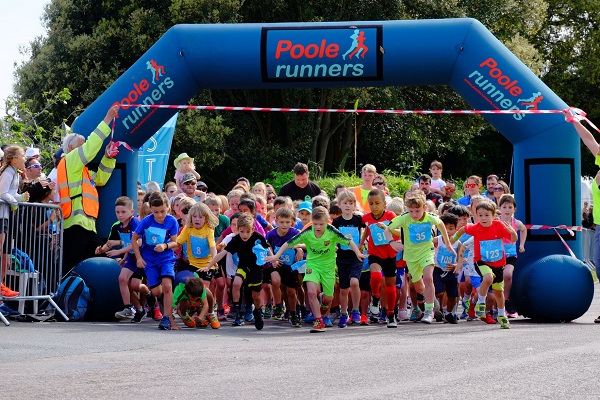 The Poole Festival of Running (PFOR) saw 2,000 runners of all ages drawn to Poole Park at the weekend, with plenty of enthusiasm shown by the youngest competitors in the Minithon.

Timo Green took a tumble at the start of the race for 6-7 year olds, taking a few down with him, but he recovered bravely to finish 30th (7:52) in a race won by Ryan Bemand (6:14). The Minithons saw 300 young runners showing similar ambition to young Timo in four age group divisions on Saturday evening (1 June).

Sunday morning at PFOR sees the original Poole 10K and the newly introduced Poole Half Marathon share the stage. Both races now take full advantage of Poole's historic Quay and Harbourside areas, with some of the course on hard gravel paths.

There were 1,300 runners starting, with around two-thirds opting for the traditional 10K. Steve Gallienne (31:13 PB) and Jacek Cieluszecki (33:00) returned to the fray after their success in the 5K but were split by Bournemouth's former Commonwealth Games Marathon runner Steve Way (M40, 32:12). Louise Damen (W35 Winchester, 36:00) was the most illustrious athlete competing, having represented GB in three World and three European cross country championships, plus the Glasgow Commonwealth Games Marathon. Past glories meant little as she was kept more than honest by Lucy Marland (Cardiff, 36:09 PB) and Heidi Tregenza (Cornwall, 36:12).