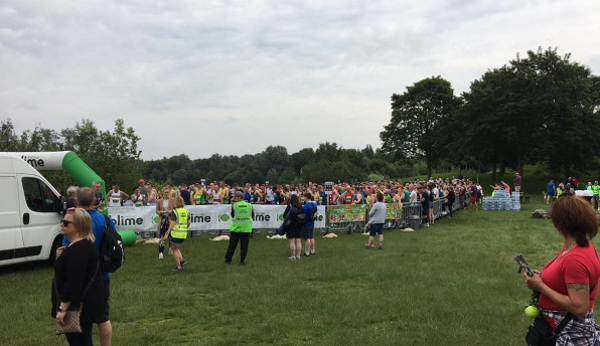 The Race Makers made the Sublime Peterborough Midsummer’s 10K an event to remember on Sunday 23 June. They were one of several highlights of a simply perfect day for many.

Over 600 runners took part in this well-organised event from Sublime Racing and sponsored by Advance Performance. It contained all the ingredients for a quality 10K namely a beautiful course, excellent marshals, and a great goody bag. The weather played its part with warm and sunny conditions forming a backdrop throughout.

Ferry Meadows within Nene Park in Peterborough, Cambridgeshire was the location for a traffic-free and relatively flat 10K. The route went through meadows, woodland and lakes and included a wobbly bridge to keep things interesting and there was support from the Race Makers the entire way round. In addition there was good camaraderie between runners as they passed each other.

It was a bumper day for club BRJ Run and Tri with a win and second place in the men’s race and runner-up in the women’s race.

David Hudson of BRJ Run and Tri was first across the line in 33:35, over half a minute ahead of his teammate John Uff who was second in 34:09. Scott Meadows of Bushfield Joggers was third in 35:04.

Rhiannon Baxter of Wreake Runners was the winning female in 40:04 followed by Shelley Duffy of BRJ Run and Tri in 40:19. Sally Hurst of Renegade Runners was third in 42:37.

A medal, technical T-shirt, bottle of water and goody bag was presented to each runner – with the latter singled out for praise. For some it was their first Sublime race but if post-race social media feedback is to be believed it won’t be their last.