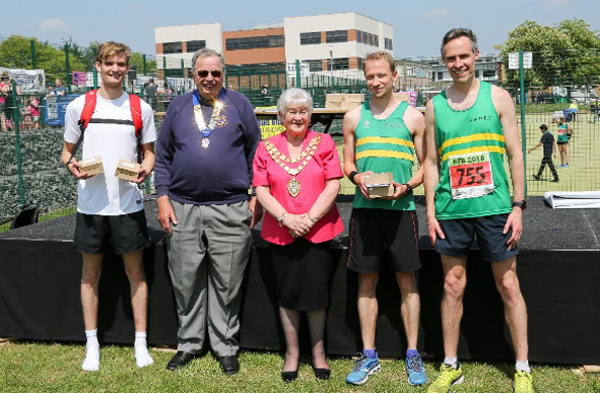 No Worries At Knowle 10K

There were blue skies, warm sunshine and a large volume of entries at last weekend's (20 May) 35th Knowle Fun Run. This perfect day was further enhanced by a display of sportsmanship from Zack Nolan.

The new mayor of Solihull, Councillor Flo Nash started the race at 12 noon, giving everyone a good send off from Arden Academy. Runners had a choice of one lap (5k) or two laps (10k) both of which were held on traffic-free roads around Knowle. This event also included four KIDSruns for children under 9 years on playing fields at the Academy.

Many people were running for Breast Cancer Haven West Midlands, Headway and local causes, all supported by Knowle and Dorridge Lions who organise this annual event. The Lions receive additional help from local companies whose contribution ensures that the Fun Run goes ahead to the benefit of charities.

In the 10K, Amittai Ben-Israel was leading the race and looked certain to win when disaster struck at the final turn. He went in the wrong direction and appeared to head off on a third lap of the course. Behind him was his training partner and local runner Zack Nolan who crossed the line to claim victory. However, Nolan reported the error to race officials who reinstated Ben-Israel as the winner.

Over £36,000 has been raised for the event’s designated charities.