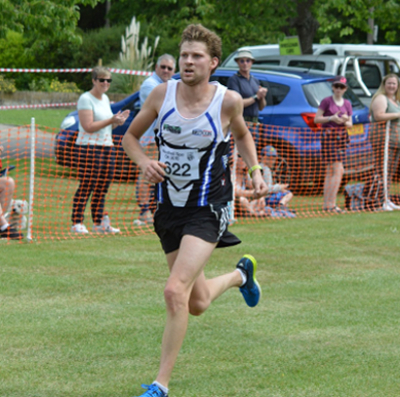 Nick Martin was a man on a mission as he zoomed across the finish line at Sunday’s (2 June) Woodhall Spa 10K. An iconic RAF medal was his reward.

The Woodhall Spa 10K and Family Fun Run was organised by a team of volunteers from the local community with the core team, members of the Woodhall Spa and Horncastle Round Table. Other local groups and organisations play their part, undertaking vital roles on the day that ensure the race goes smoothly and have done so for more than 10 years.

Lincolnshire has a distinguished aviation history that includes the famous 617 Squadron – ‘the Dambusters’ who were based at RAF Woodhall Spa from January 1944 to May 1945. Previous race medals reflect this heritage and continued with this year’s offering to the delight of those taking part.

It was ‘chocks away’ beginning with the Family Fun Run and wheelchair athletes followed by the runners at 11.15am. They followed a single lap, fast and flat course that started and finished in Jubilee Park and was expertly marshalled throughout.

Nick Martin of Caistor RC raced home to win in 31:51. William Strangeway of Lincoln Wellington AC was second in 32:29 with teammate Jake Richardson third in 33:28.

Cloe Hubbard of Newark AC was the winning female in 36:18 followed by Laura Wilkinson of Lincoln Wellington AC in 38:12. Katie Ball of Boston Tri Club was third in 39:12.

Every finisher was presented with a WWII RAF pilot themed medal. This year's medal recieved rave reviews and was described as: "a beauty and one of the best. It's shaped like the head of an RAF pilot complete with leather flying helmet and oxygen mask."
Profits from the race were donated to the community whose support is invaluable.