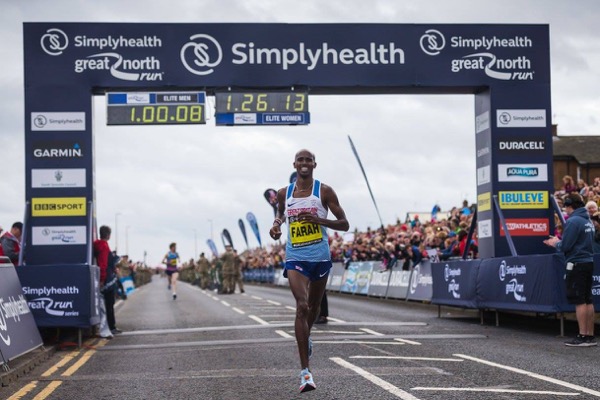 Mo aims for six in a row at Great North

Sir Mo Farah has made clear his intentions of sticking to longer distance running by confirming he will compete at the Great North Run. Farah will use the event, at which he is aiming to become the first ever runner to claim six titles, as preparation for the defence of his Chicago Marathon title in October.

Since 2014, Farah has remained unbeaten at the Tyneside event and he will be looking to re-write history once again on Sunday 8 September with another victory. On his participation, Farah commented: “I’m going to be giving it my best shot. Winning it once was special enough, to win it for the sixth time would be unbelievable."

Farah continued: “It was a massive part of my preparations for Chicago last year and it will be as important this year. The Simplyhealth Great North Run is one of my favourite races, it’s something that I always look forward to and I can’t wait to be back on that start line in Newcastle in September.”

Just as he did in 2018, the Great North Run will be central to Farah’s preparations for Chicago Marathon, which is staged one month later (Sunday 13 October). Farah put in his strongest performance over 26.2 miles in the US, setting a European record of 2:05:11 on his way to victory at this famous Marathon Major.

Farah’s participation indicates that he will continue to seek success over marathon distance, having ruled out a return to the track after winning the Vitality London 10K in May.