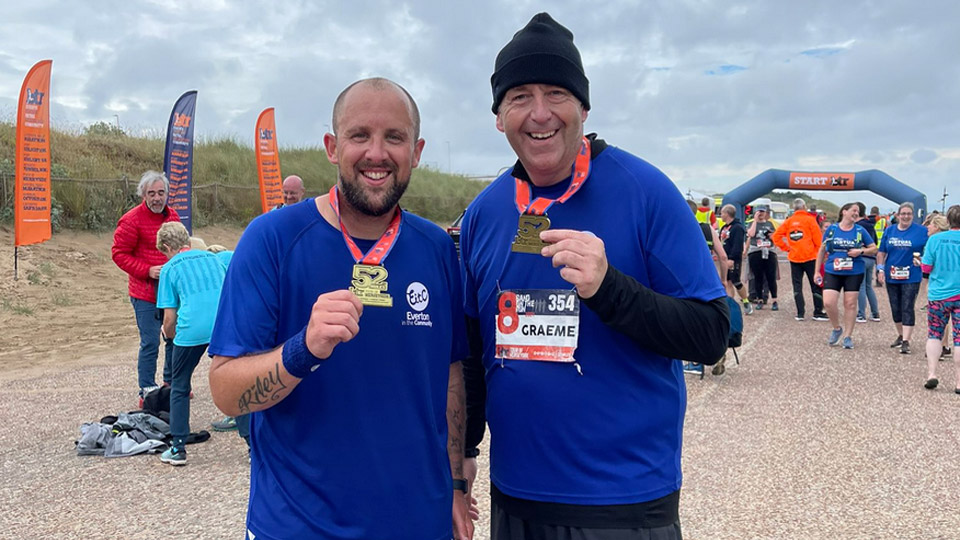 6-day trippers go the distance at Tour of Merseyside 2021

Running in the North West made a major comeback as 300 completed the 52-mile, 6-stage Tour of Merseyside

It started on the seafront at Southport on Sunday 27 June and finished 6 days and 52 miles later on the Wirral Coast. And for 300 heroes The Tour of Merseyside 2021 is a trip they'll never forget.

Stops followed at Thurstaston on Monday for a test across track, beach, hill and dale before 10 miles along the cycle track at Walton. Wednesday was a rest day before the fun resumed (literally) on Thursday when dozens of tourists turned up in fancy dress for the 5-miller at Otterpool Promenade.

After completing the Wirral event Becky said: "Busy week in work…add in the Tour of Merseyside 2021 - 6 races, 7 days, 52 Miles - What.A.Week! Becky summed up the feeling of all the finishers when she continued: "Success is achieved by ordinary people with extraordinary determination."

Another Tour hero was popular Everton FC stadium commentator Graeme White. The self-effacing Graeme had labelled himself #FatLadTakingOnTheTour and was delighted to complete the 52 miles: "I can’t explain how I am feeling, it was tough physically & mentally. So pleased I accepted the challenge to do it."

Graeme was one of dozens of tourists who ran for a good cause and he has already raised over £1600 for Everton in the Community via Just Giving.

Event organiser btr Liverpool's Alan Rothwell congratulated all of the 300 successful tourists including overall winner Chris Pownell and women's champion Carmel Edwards. Alan told runABC North: "Given what everyone has been through over the last 15 months it was amazing to be part of the famous Tour of Merseyside camaraderie again.

"Highlights were the opening day at Southport and the 'party atmosphere' at the Otterpool 5 where everyone got into the spirit. Fancy dress favourites were Mr Blobby, the T-Rex, the Wizard of Oz gang and Whitey's boxer. And, of course, the buzz at the end of the Wirral race on Day 6 was amazing."

Alan Rothwell reports that the 2022 Tour of Merseyside is close to a sell-out already despite extra places being available.

The btr Liverpool team are now preparing for their feature Liverpool Half Marathon on 12 September and the iconic Mersey Tunnel 10K on 26 September. Alan Rothwell expects bumper fields for these North-West classics: "The feeling I was picking up at the Tour and around the city is that people in general and runners in particular want to get back to doing the things they love. There's going to be an amazing atmosphere at our September races."

You can enter Liverpool Half Marathon & 10 Miler and Mersey Tunnel 10K via runABC North website.