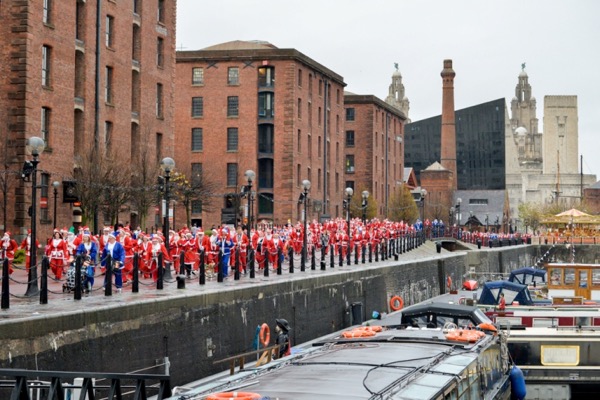 The recent BTR Liverpool Santa Dash will feature in a brand new TV charity telethon tomorrow (Friday 21 December). Santa Dashers will appear on Channel 5 as part of their festive fundraising campaign, Help The Animals at Christmas, which BTR Liverpool joined forces with for the recent event.

Earlier this month, 7,000 Santas pulled on their running shoes to take part in the 15th annual red and blue extravaganza, often regarded as the city’s kick-start to Christmas and the UK’s biggest festive fun run.

The BTR Liverpool Santa Dash was chosen by Channel 5 as the official fundraising event partner for its new festive campaign, Help The Animals at Christmas.

The campaign aimed to raise awareness and funds to help support the vital activities of UK animal welfare charitable organisations, including the type of work carried out by the five nominated animal charities RSPCA, Scottish SPCA, Blue Cross, The Donkey Sanctuary and Wildlife Aid Foundation.

Channel 5 TV crews were located around the city on Santa Dash day to capture the fun on camera and will screen the coverage from the event on Friday evening. BTR race director Alan Rothwell commented: “The atmosphere at this year’s BTR Liverpool Santa Dash was second to none. It’s a real city spectacular, everyone has an incredible time and the smiles just get bigger.

“Tune in to Channel 5 at 8pm this Friday and support Help The Animals at Christmas campaign – you may just see yourself dashing through Liverpool as a Santa. Now that’s definitely worth a watch! Thank you to everyone who took part this year. We hope you can join us for the 16th BTR Liverpool Santa Dash on Sunday 1 December 2019. Merry Christmas and Happy New Year from BTR – Born To Run.”