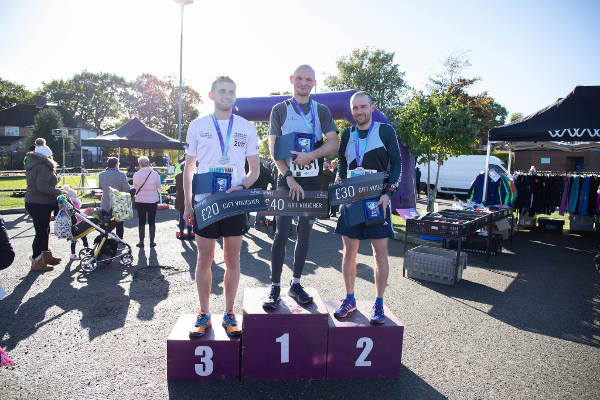 McDonnell and Marks score at Rugby Half Marathon

Alistair McDonnell held off a challenge from teammate Stephen Marks to win the men's race at Sunday’s (28 October) Rugby Half Marathon. The Rugby & Northampton AC pair weren’t the only ones celebrating a podium finish for their club.

Nearly 700 runners toed the line on a sunny morning in Rugby, ready for the 9.30am start at Hartfield Sports Ground. A 1K Family Fun Run was held at 9.15am followed by the main event 15 minutes later, on town and country roads that included the disused Great Central railway line – now a local nature reserve.

McDonnell, Marks and Baker made it a red letter day for their club with a first, second and third at this popular event from The Race Organiser. Many others were equally delighted as they completed their first half marathon or hit their PB’s thanks to the team of pacers.

Also taking part was Juan Manuel Vera Bacallado or ‘El Guapo’ as he is more popularly known. He wore a pair of trekking sandals for this race and began with a 1.5 mile warm up then the half marathon followed by a two mile recovery walk. El Guapo finished in 2:07:09.

Image courtesy of The Race Organiser.