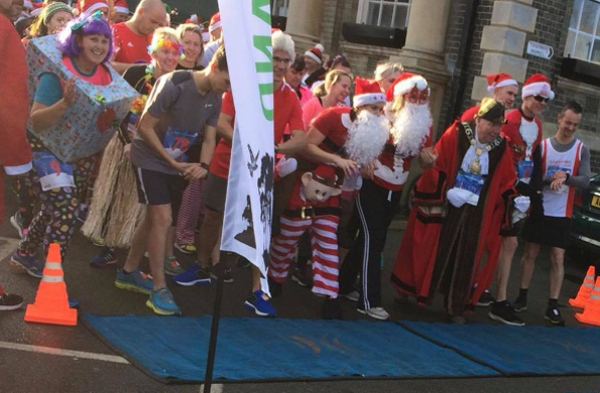 Mayor of Thetford joins in festive fun at Santa 5K

The Mayor of Thetford lined up alongside nearly 200 runners at the start of the town's Santa Run last Sunday (2 December) and he was an enthusiastic participant from start to finish.

There was plenty of local support for the Thetford Winter Wonderland 5K Santa Run which received the mayoral seal of approval from Councillor Roy Brame and his wife Karen. Mayor Roy joined in with the Zumba warm up, ran the first part of the 5K and along with his wife then handed out medals to runners as they crossed the finish line.

The colourful field headed off from the Grade II listed Guildhall to follow a 5k route around Thetford on footpaths (apart from a short off-road section). Steven Burge got home first in 21:39 with Richard Taylor second in 21:47 and William Marshall third in 22:10. Heidi Teixeira was the fastest female in 24:39 followed by Louise Hurr in 24:55. Adele Stach-Kevitz came third in 25:39.

There were medals and mince pies for the finishers and prizes for the best fancy dress. One lucky runner won a voucher for a free, three month membership of SNAP Fitness.

Organised by Run Breckland in conjunction with Thetford Town Council the Santa Run formed part of the Winter Wonderland celebrations taking place last weekend. The event raised £500 for the Mayor’s Charity Trust, donated £50 to the volunteer first aiders and is able to sponsor two guide dog puppies for the first two years of their training.